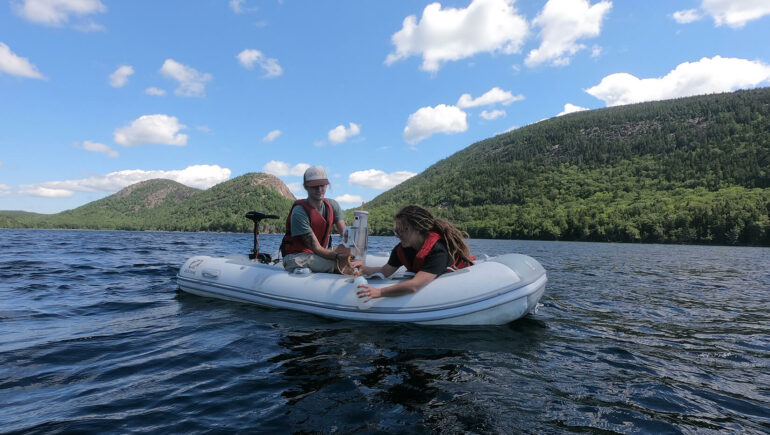 Acadia National Park is known for its beautiful lakes—and they can tell scientists a lot about the health of the environment. New research shows that regulations to reduce human-caused sulfur in the atmosphere have made a difference for lakes in Acadia National Park, though climate change may slow that recovery.

Research from the 1990s showed that human-caused atmospheric pollution in the 20th century caused the acidification of lakes across eastern North America starting in the 1940s. Acidification of lakes causes the decrease of dissolved organic carbon in lakes, which impacts lake ecology and makes water appear clearer.

Since the Clean Air Act Amendments were federally enacted in 1990, the northeastern United States has received significantly less atmospheric acid depositions with the goal of restoring ecosystems like lakes that were impacted by the pollution. However, climate change can also impact lake water clarity, as rising temperatures drive the production and release of dissolved organic carbon, while shifts in precipitation caused by climate change also can bring in more organic matter.

Researchers from the University of Maine and the National Park Service wanted to see how these changing acidification dynamics were affecting the ecosystems in different types of lakes in Maine. In an article published in the Journal of Paleolimnology, scientists reconstructed historical pigment records of algae and diatoms—a particular type of algae with a silica shell, which is usually negatively impacted by acidification—from two lakes in Acadia National Park, Jordan Pond and Seal Cove Pond.

Despite being close geographically, the two lakes are very different. Jordan Pond is considered a “clear-water” or oligotrophic lake, meaning its waters are relatively low in plant nutrients with abundant oxygen at its depths. Seal Cove Pond is a “brown-water” or mesotrophic lake with a moderate amount of nutrients.

“Recovery from acidification is partially dependent on water clarity, which is impacted by climate change. Across North America and northern and central Europe, there is an ongoing trend toward ‘brownification’ of lakes. Several studies have described ecological changes in clear- vs. brown-water lakes in response to reductions in acid deposition and browning, and our paleolimnological study provides long-term context for interpreting those changes,” says Rachel Fowler, biology lab coordinator who served as the principal investigator of the project for her Ph.D. in the University of Maine Climate Change Institute.

The researchers took sediment cores from the deepest parts of both ponds and analyzed the concentrations of different types of algae and the way they varied over time. The results showed the algae in the lakes responded differently over time to acidification. Despite their differences, both ecosystems are recovering since environmental regulations have reduced the amount of atmospheric sulfur in the area, with many types of algae returning where they had once been pushed out by acidification.

“An exciting takeaway is that this study illustrates the effectiveness of the Clean Air Act Amendments. We can see signs of recovery from acid deposition using the remains of algae preserved in the sediments of Jordan Pond and Seal Cove Pond,” says Fowler.

However, the results also suggested that clear-water lakes like Jordan Pond are more sensitive to climate warming than brown-water lakes like Seal Cove Pond. Recovery of the algal ecosystem has been slower for Jordan Pond, and may continue to be hampered by the effects of climate change.

“Lake color and clarity are major regulators of lake ecology. They can alter the physical and chemical structure of lakes, and contribute to the types and amount of algae living in lakes, too. With the trend toward brownification of lakes due to climate change and other environmental factors, it’s essential that we understand the ecological consequences for the lakes we value for drinking water, recreation and year-round natural beauty,” says Fowler.

More information:
Rachel A. Fowler et al, Paleolimnological comparison of algal changes in a clear-versus a brown-water lake over the last two centuries in the northeastern U.S.A, Journal of Paleolimnology (2022). DOI: 10.1007/s10933-022-00233-0

Provided by
University of Maine