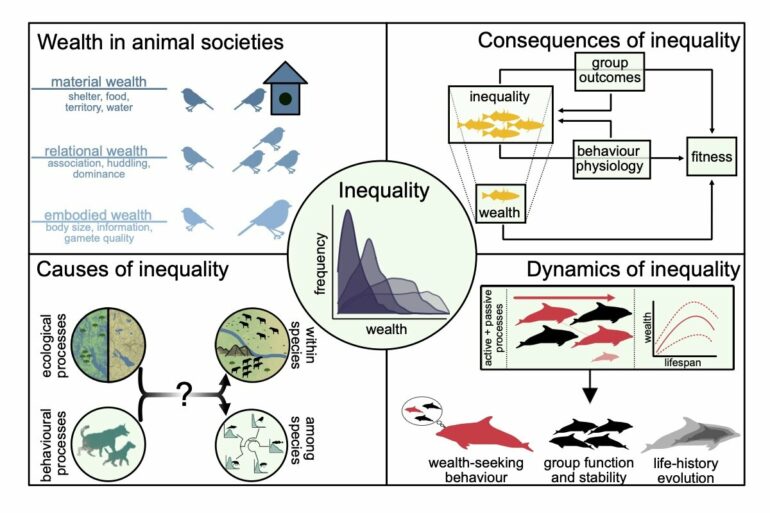 Wealth inequality is a research topic typically reserved for humans. Now, research from the Max Planck Institute of Animal Behavior and the University of Nebraska-Lincoln suggests that studying wealth inequality in animals can help shed light on social evolution. Adapting approaches from the study of wealth inequality in humans, the researchers show how wealth—in the form of material goods, individual attributes, or social connections—occurs broadly across animal species and can be distributed equally or unequally. This framework offers the opportunity to unite different corners of evolutionary biology under the umbrella of wealth inequality, exploring the idea that the unequal distribution of value, whatever form that value may take, has important consequences for animal societies.

Inequality is one of the greatest challenges of modern society and plays a prominent role in social and political debate. In the fields of economics and sociology, scholars study inequality in order to understand where it comes from, what are its consequences, and how we might implement policies that produce more productive, healthy, and equitable societies. An insight from this work is that inequality can have potent consequences for those of us living in these societies.

It was this finding that captured the attention of Eli Strauss, from the Max Planck Institute of Animal Behavior in Germany (MPI-AB), and Daizaburo Shizuka, from University of Nebraska-Lincoln—two behavioral ecologists who study social evolution in non-human societies. “Reading these fascinating sociology and economics papers, it struck me that this work shares a common goal with my work in animal behavior, which is that we both want to understand how inequality arises and affects outcomes for individuals and groups,” says Strauss, first author on the paper and a post-doctoral researcher at MPI-AB.

A new framework in the study of social evolution

It’s not that inequality hadn’t been studied in animals before. Animal researchers have long explored differences among animals in their physical traits, the territory and resources they acquire, the structures they construct, or the social power they wield. However, what was missing was the overarching view that these different dimensions of animals’ lives are linked under the umbrella of inequality. “As we read, we wondered how the scholarship on the causes and consequences of inequality in humans could help biologists like us better understand animal societies,” says Daizaburo Shizuka, an Associate Professor in the School of Biological Sciences at the University of Nebraska-Lincoln.

In a review paper published in Proceedings of the Royal Society B, Strauss and Shizuka gather work from different academic fields to bridge the divide between inequality research in human and animal societies. Their focus was on what might be learned about animals by drawing inspiration from studies of inequality in humans. Their review is among the first studies to unite these different areas of research as a means to understand how the unequal distribution of value—in whatever form it takes—shapes animal societies.

Can animals have ‘wealth?’

First, however, the researchers had to find common ground across humans and animals. In humans, “inequality” exists when something of value is distributed unequally among individuals. Usually, that value is defined as their wealth.

“Animals don’t have bank accounts, so how can they be wealthy?” says Strauss. To answer this question, the scientists turned to research in evolutionary anthropology that explores inequality in hunter-gatherer, pastoralist, and other small-scale human societies. “These societies show varying degrees of wealth inequality, but wealth isn’t limited to bills and coins,” he adds. Instead, anthropologists view wealth as more broadly made up of material goods, individual characteristics like knowledge or hunting ability, and social connections. For instance, a woman could be wealthy by owning many cows, being skillful at growing crops, or having influence in her society.

The review highlights the ways in which these same human dimensions of wealth very clearly operate in animals. Territory ownership and access to food are types of material wealth that are widespread in animals. For instance, squirrels and acorn woodpeckers build food caches and stock them with hordes of nuts and seeds. In dolphins and New Caledonian crows, tool use techniques are valuable chunks of information that open up new foraging opportunities.

Social relationships are also a critical source of wealth in many species, such as in spotted hyenas and ravens, which form alliances with their group-mates that help them rise through the ranks in their societies. Interestingly, like wealth in humans, wealth in animals is sometimes transferred from parents to offspring. Just as money can vary in how unequally it is distributed among people, these types of wealth can be spread fairly evenly among individual animals or can be concentrated in the hands of just a wealthy few.

Armed with this broad view of wealth inequality, the authors then explore the ways that inequality research in humans can help us better understand how animal societies work. They discuss theories about what make some societies more unequal than others, the consequences of inequality for individual health and group success, and the ways that individuals and lineages change in wealth over time through social mobility.

Shizuka says, “The structure of a society has a lot of different influences on all individuals that live within it. In many cases, the differences between individuals arise from the various ways in which unequal societies affect them. In turn, individuals try to exert control over or navigate these unequal systems in different ways. The biology of animal societies includes these types of dynamics, and we can’t understand the evolution of social animals without recognizing this feedback between the individual and the society.”

“Our hope is that this paper will guide future research into wealth inequality across species, which will ultimately lead to a better understanding of the evolution of traits that help animals get the most out of living socially,” adds Strauss.

The authors acknowledge that studying inequality in animals could also shed light on how inequality operates in human societies, but advise that caution is needed when looking to animals to understand ourselves. Humans are a particular animal species with unique social and cognitive traits. While it’s unlikely that inequality operates completely differently in humans than in other animals, there are also no other societies that operate at the scale of the modern human global economy.

“We can look to other species to understand the general evolutionary processes that produce all animals, ourselves included,” says Strauss, “but the question of what makes an ethical human society is fundamentally a moral question where the social lives of animals can’t guide us. This is something we need to figure out on our own.”


Citation:
Studying wealth inequality in animals can reveal clues about how their societies evolved (2022, May 3)