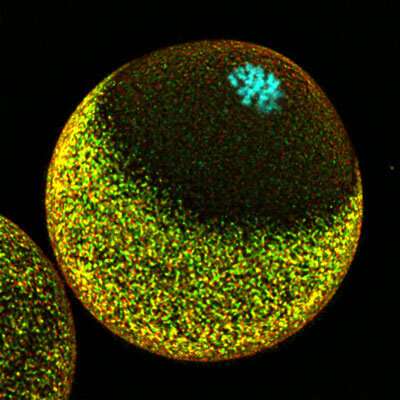 RIKEN researchers have shown how the genomic sorting that occurs during fertilization—the incorporation of genomic material from both parents and the elimination of excess maternal DNA from the egg—takes place in mice. If the same process occurs in humans, the finding could help to improve some assisted reproductive technologies.

Sperm and ova are produced through a cell-division process known as meiosis, whose end product is cells containing one copy of each chromosome. But in many vertebrates, including humans, this process naturally pauses for unfertilized ova, leaving these cells with both copies of each maternal chromosome. Meiosis proceeds after fertilization, eliminating one of these extra maternal genome copies.

There are mechanisms to prevent accidental ejection of the paternal genome when meiosis resumes, as the presence of maternal DNA alone will cause development to stall. But this sorting process has been tough to untangle. “The lack of robust techniques for high-resolution imaging of live cells has hampered the study of fertilization as a continuous process,” explains Masashi Mori of the RIKEN Center for Biosystems Dynamics Research.

Now, Mori and his colleagues have developed a microscopy strategy that allowed them to directly visualize chromosomal dynamics in a fertilized mouse egg.

Using this technique, they discovered that the unfertilized egg organizes its internal protein infrastructure in a way that biases sperm fusion at sites far from the maternal chromosomes. This is achieved partially through the formation of structures on the surface of the egg that appear to physically transport the sperm to an appropriate fusion site.

When fertilization occurs, the same arrangement of proteins helps to sequester paternally and maternally contributed DNA. This keeps those chromosomes secure when meiosis resumes and divides up the maternal DNA—one set of mom’s chromosomes will be shed entirely, while the other will remain behind to form a complete set with dad’s DNA in the newly formed zygote.

The team now hopes to find clinical collaborators who can help confirm whether the same process plays out in humans. If it does, these findings could have important implications for assisted reproductive technologies. For example, intracytoplasmic sperm injection, in which sperm are directly fused with ova in the laboratory, could fail if clinicians aren’t mindful of where they aim. “In some intracytoplasmic sperm injection zygotes, injected sperm may be too close to maternal chromosomes and the paternal chromosomes might be eliminated,” says Mori. “Our study suggests that the visualization of maternal chromosomes by a non-invasive technique would help to prevent this.”