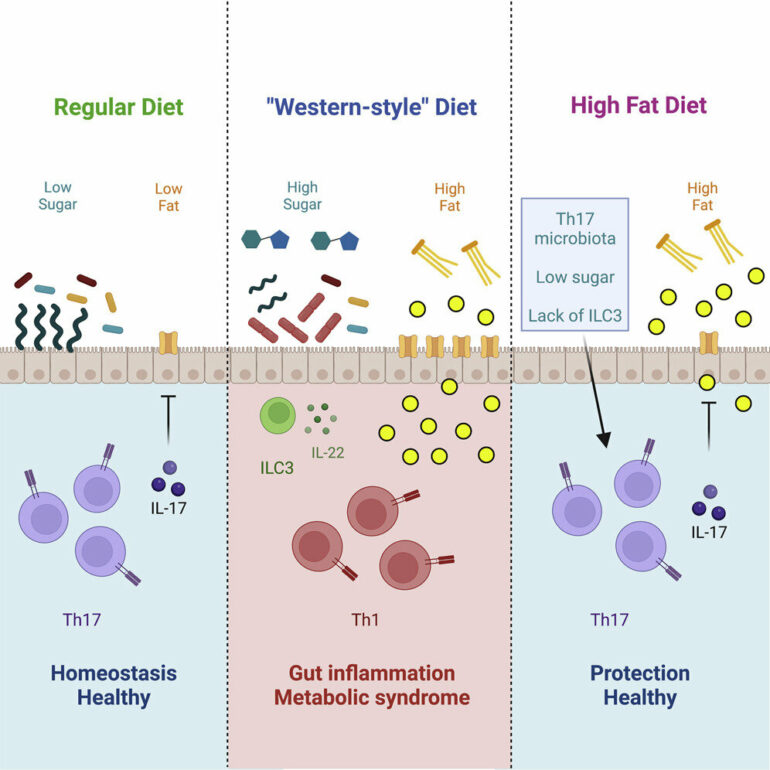 A study of mice found that dietary sugar alters the gut microbiome, setting off a chain of events that leads to metabolic disease, pre-diabetes, and weight gain.

The findings, published today in Cell, suggest that diet matters, but an optimal microbiome is equally important for the prevention of metabolic syndrome, diabetes, and obesity.

A Western-style high-fat, high-sugar diet can lead to obesity, metabolic syndrome, and diabetes, but how the diet kickstarts unhealthy changes in the body is unknown.

The gut microbiome is indispensable for an animal’s nutrition, so Ivalyo Ivanov, Ph.D., associate professor of microbiology & immunology at Columbia University Vagelos College of Physicians and Surgeons, and his colleagues investigated the initial effects of the Western-style diet on the microbiome of mice.

After four weeks on the diet, the animals showed characteristics of metabolic syndrome, such as weight gain, insulin resistance, and glucose intolerance. And their microbiomes had changed dramatically, with the amount of segmented filamentous bacteria—common in the gut microbiota of rodents, fish, and chickens—falling sharply and other bacteria increasing in abundance.

The reduction in filamentous bacteria, the researchers found, was critical to the animals’ health through its effect on Th17 immune cells. The drop in filamentous bacteria reduced the number of Th17 cells in the gut, and further experiments revealed that it’s the Th17 cells that are necessary to prevent metabolic disease, diabetes, and weight gain.

“These immune cells produce molecules that slow down the absorption of ‘bad’ lipids from the intestines and they decrease intestinal inflammation,” Ivanov says. “In other words, they keep the gut healthy and protect the body from absorbing pathogenic lipids.”

What component of the high-fat, high-sugar diet led to these changes? Ivanov’s team found that sugar was to blame.

“Sugar eliminates the filamentous bacteria, and the protective Th17 cells disappear as a consequence,” says Ivanov. “When we fed mice a sugar-free, high-fat diet, they retain the intestinal Th17 cells and were completely protected from developing obesity and pre-diabetes, even though they ate the same number of calories.”

But eliminating sugar did not help all mice. Among those lacking any filamentous bacteria to begin with, elimination of sugar did not have a beneficial effect, and the animals became obese and developed diabetes.

“This suggests that some popular dietary interventions, such as minimizing sugars, may only work in people who have certain bacterial populations within their microbiota,” Ivanov says.

In those cases, certain probiotics might be helpful. In Ivanov’s mice, supplements of filamentous bacteria led to the recovery of Th17 cells and protection against metabolic syndrome, despite the animals’ consumption of a high-fat diet.

An easy relationship between a beetle and its yeast symbiont

Providing Th17 cells to the mice also provided protection and may also be therapeutic for people. “Microbiota are important, but the real protection comes from the Th17 cells induced by the bacteria,” Ivanov says.

“Our study emphasizes that a complex interaction between diet, microbiota, and the immune system plays a key role in the development of obesity, metabolic syndrome, type 2 diabetes, and other conditions,” Ivanov says. “It suggests that for optimal health it is important not only to modify your diet but also improve your microbiome or intestinal immune system, for example, by increasing Th17 cell-inducing bacteria.”