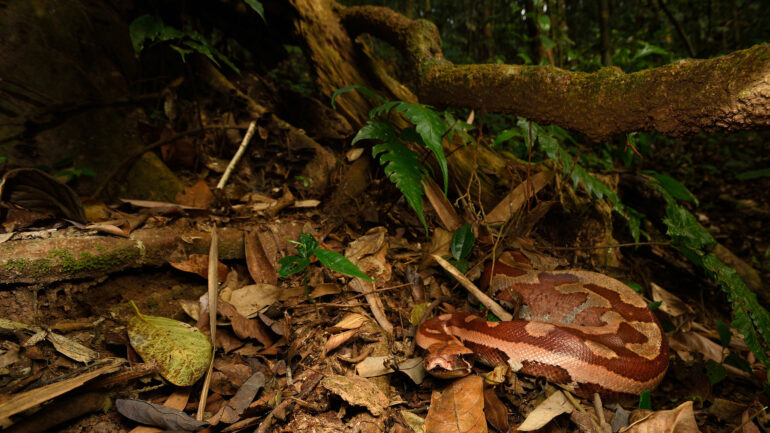 Wildlife trade is a multimillion dollar industry. While some animals are traded legally, in compliance with legislation that aims to protect populations, wildlife trafficking continues to thrive in many places, threatening precious species with extinction.

Reptiles are exported in large numbers, and snakes are no exception. They are mostly traded for their skins, which are used in luxury leather products, or as pets. In the case of the blood python, which can reach up to 250 cm in length, there are clear indications of misdeclared, underreported or illegal trading involving tens of thousands of individuals around the world.

According to Vincent Nijman, professor in anthropology at Oxford Brookes University in the UK, harvest and trade in certain species of snakes, especially ones that are common and have a high reproductive output, can be sustainable. But how do we make sure it really is?

“Sustainability is best assessed by surveying wild populations, but this takes time and effort,” Nijman explains. “An alternative method is to use data from slaughterhouses and compare how certain parameters (number of snakes, size, males vs females) change over time.”

This method has been used by several research groups to assess the sustainability of the harvest and trade in blood pythons in Indonesia. The outcomes of these assessments vary widely, with some researchers claiming the trade is sustainable, and others that it is not and that populations are in decline.

“A major problem with these assessments is that while they can detect a change in, for instance, the number of blood pythons that arrive in slaughterhouses, it is unclear if this is due to changes in the wild population, changes in harvest areas, methods of harvesting, or changes in the regulations that permit the harvest to take place,” Nijman elaborates.

Using publicly available information, and searching for evidence of illicit trade, he set out to establish if there is sufficient data to assess whether blood pythons are indeed exploited sustainably in Indonesia.

“There is no conclusive data to support that the harvest of blood pythons in North Sumatra is sustainable, but there is sufficient evidence to suggest that a substantial part of this trade is illegal,” he points out in his study, which was published in the open-access journal Nature Conservation.

He goes on to explain that there is no one-on-one relationship between the sustainability of harvest and trade and its legality. “A species can be legally traded to extinction, or it can be traded illegally in small enough numbers for it to be sustainable.”

A clear trend in the last decade was a change in the way blood pythons are harvested, compared to previous periods, “from opportunistic capture to, at least in part, targeted collection.”

Blood pythons are not included on Indonesia’s protected species list, but their harvest and trade, both domestically and internationally, is regulated by a quota system. The harvest for domestic trade typically constitutes 10% of what is allowed to be exported.


Citation:
The snake trade in Indonesia is not sustainable enough—but it could be (2022, May 20)