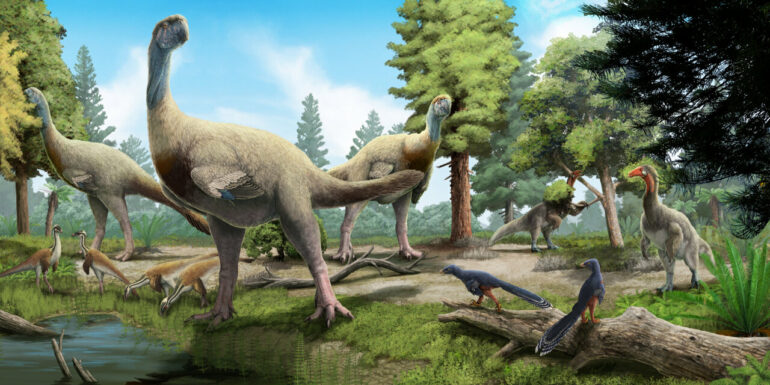 Researchers used digital modeling and computer simulation to uncover a common trend of jaw strengthening in theropods—expanding the rear jaw portion in all groups, as well as evolving an upturned jaw in carnivores and a downturned jaw in herbivores.

The international team, led by scientists at the University of Birmingham, created digital models of more than 40 lower jaws from five different theropod dinosaur groups, including typical carnivores like Tyrannosaurus and Velociraptor, and lesser-known herbivores like ornithomimosaurs, therizinosaurs and oviraptorosaurs.

Fion Waisum Ma, Ph.D. researcher at the University of Birmingham, who led the study, said: “Although theropod dinosaurs are always depicted as fearsome predators in popular culture, they are in fact very diverse in terms of diets. It is interesting to observe the jaws becoming structurally stronger over time, in both carnivores and herbivores. This gives them the capacity to exploit a wider range of food items.

“Theropod dinosaurs underwent extreme dietary changes during their evolutionary history of 165 million years. They started off as carnivores, later on evolved into more specialized carnivores, omnivores and herbivores. Studying how their feeding mechanics changed is key to understanding the dietary transitions in other vertebrate animals too.”

For example, in carnivores like tyrannosauroids, an early form like Guanlong had a relatively slender and straight jaw. But later forms such as Tarbosaurus and Tyrannosaurus evolved deeper jaws with the front portion bending upward, which increase jaw strength.

Having a strengthened jaw is especially important to herbivorous theropods, as their jaws experience considerable stress from repetitive plant cropping. Herbivores like Erlikosaurus and Caudipteryx have extremely downward-bending jaws that could help dissipate such stress.

Dr. Stephan Lautenschlager, Senior Lecturer at the University of Birmingham and senior author of the study, said: “It is fascinating to see how theropod dinosaurs had evolved different strategies to increase jaw stability depending on their diet. This was achieved through bone remodeling—a mechanism where bone is deposited in regions of the jaw that experience high stresses during feeding.”

The researchers studied the feeding mechanics of tyrannosaurids through growth and observed that the deeper and more upturned jaws of adult theropods, such as Tyrannosaurus and Tarbosaurus, are structurally stronger compared to those of their juvenile forms.

Dr. Lautenschlager further explained: “The similarity between jaw strengthening through growth and through time suggests that developmental patterns in juvenile dinosaurs ultimately affected the evolution of the whole group. This likely facilitated the jaw evolution of theropod dinosaurs and their overall success for over 150 million years.”