Toxic ‘forever chemicals’ found in otters across England and Wales 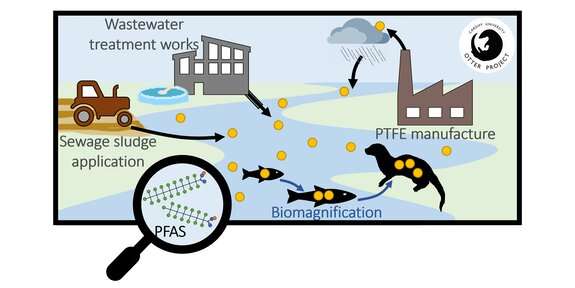 A group of synthetic substances known as “forever chemicals” because of their environmental persistence have been found in otters across England and Wales.

The study led by Cardiff University’s Otter Project analyzed historical data and found perfluoroalkyl and polyfluoroalkyl substances (PFASs), which have been linked to health problems in both humans and wildlife, in Eurasian otters.

It concludes this suggests “widespread pollution” of British freshwaters today.

The study found most PFASs in otters were associated with wastewater treatment works or use of sewage sludge in farming, suggesting this was a “significant and concerning” route into rivers.

The Cardiff researchers said studying contaminants in otters was vital to understanding potential health risks. Their study was published just days before a parliamentary report said no English river was free from pollution.

Emily O’Rourke, a Ph.D. student and lead author of the study, said: “PFASs are a large family of synthetic chemicals used in consumer products for their oil and water-repelling properties, in food packaging, non-stick cookware, waterproof clothing, stain resistant products, paints and fire retardants, amongst other things.

“They’re known as ‘forever chemicals’ because their strong carbon-fluorine structure means they don’t break down easily in the environment. In recent years there have been efforts to phase these chemicals out, but they remain ubiquitous because of their environmental persistence.”

Eurasian otters are top predators of British freshwaters and can act as strong indicators of the levels of these chemicals in the environment. In this study, analysis of livers from otters across England and Wales found PFASs in all 50 sampled. In more than 80%, 12 different types of PFASs were found.

The study sampled otters that died in 2007–09 and looked at where they were found, along with land use, from that time. The researchers chose this period because it coincided with changes in legislation and use of PFASs—the two most widely used were being phased out but replacements were emerging.

The findings of their latest study are supported by seperate Otter Project research on more recent samples, collected in 2015–18, which found PFASs in otters and other wildlife.

“Further work is needed to understand where the highest concentrations are now and any current sources of contaminants. It is deeply concerning PFASs were introduced into the environment through industrial and farming practices—policy and management action is vital to address this where it remains an issue,” said Mrs O’Rourke.

In the study, higher concentrations of one type of PFAS (perfluorooctanoic acid, PFOA) were associated with proximity to a factory on the north-west coast of England which had previously used this chemical in its manufacturing processes.

It found higher concentrations of PFASs in otters close to wastewater treatment works, suggesting domestic and industrial wastewater was an important source. Concentrations were also higher in otters from arable areas, which might reflect the use of sewage sludge on agricultural land.

“Our study provides further evidence to support the conclusion of the recent Environmental Audit Committee’s report which highlighted a ‘chemical cocktail’ of contaminants in our waterways,” said Mrs O’Rourke.

“The report recommended an independent evaluation of the risks to human health and the environment of spreading sewage sludge—our study provides important evidence that PFASs should be included in that evaluation.”

Dr. Elizabeth Chadwick, Principal Investigator on the Otter Project, said: “Our research was possible though the ongoing collection of otters found dead from across Britain. Our archive has samples from more 4,000 individuals collected since 1992; it is a unique and important resource for understanding this protected species, and for understanding environmental contamination and health.

“By studying chemical contaminants found in otters we can understand the relative levels in the environment and the potential health risks to both wildlife and humans. We encourage the public to continue reporting otters found dead so that our research can continue.”

Information on Cardiff University Otter Project, and how to report dead otters, can be found on the project website.