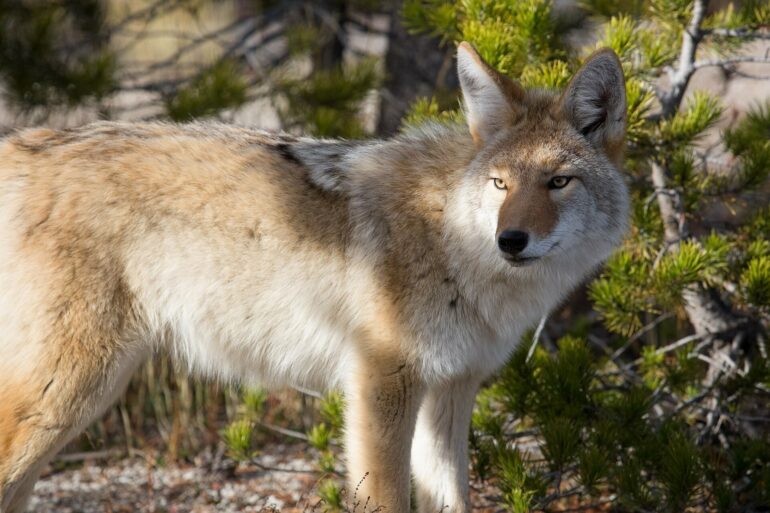 As coyotes have spread outside their native range into the eastern United States, they’ve been known to harass and kill North Carolina’s two native species of fox. A new study finds that preserving tree cover may be essential in helping the gray fox survive with coyotes in rural areas, probably because of the fox’s unusual ability to climb trees.

In the study published in Ecosphere, researchers used camera traps to find out where gray foxes coexist with coyotes in suburban, rural or wild areas of North Carolina. Surprisingly, they found gray foxes can coexist with coyotes in suburban forest fragments. However, in rural zones, they avoid areas where coyotes live that lack adequate tree cover.

“Coyotes are well known to persecute smaller foxes,” said study co-author Roland Kays, research associate professor at North Carolina State University and director of the NC Museum of Natural Sciences Biodiversity & Earth Observation Lab. “They go out of their way, more than you see in other interactions between species, to really bully, chase and kill the smaller foxes. There is some reason for concern if this species is going to survive. How is that going to happen in an urban environment where you also have people?”

Coyotes have spread across North America from their native range in parts of the western United States, taking advantage of the fact that larger predators—such as cougars and wolves—aren’t found in most of the eastern U.S. anymore.

“The general trend has been a decline in all carnivores, but there are some exceptions, and the coyote is one of the big exceptions,” Kays said.

Researchers wanted to know how coyotes might impact where native species like the gray fox are now found—especially since urbanization could affect how the two species interact by fragmenting their habitats and disrupting food sources.

“Foxes are fairly common in urban areas, perhaps in part because coyote numbers are relatively low,” said the study’s lead author Arielle Parsons, postdoctoral research associate at NC State. “In the Midwest and western United States, there are indications of ‘apparent decline’ in fox populations concurrent with coyote population increases. We don’t know if it’s a true decline yet, but there’s evidence it is.”

The researchers used wildlife photos taken by volunteers to figure out where foxes and coyotes coexist. The photos came from 915 motion-sensitive cameras that volunteers placed in yards, forest fragments and open areas in suburbs, dense suburbs, rural and wild areas. Researchers used the photos to develop a model of whether the two species are likely to be found together, and at what times.

From 347 pictures of coyotes and 943 pictures of gray foxes, they found that the two species are most likely to be found together in areas of high housing density and low forest cover—i.e, the suburbs. Coyotes were generally less likely to live in high density housing areas than the gray fox.

“These two species were more likely to use the same sites in suburban areas, especially small forested wood lots,” Parsons said. “We expected them to use these wood lots at different times to avoid each other, but actually we found that they use these suburban forest fragments at the same time.”

The researchers hypothesized that they could coexist in the suburbs because coyotes are just moving through, not establishing territories, and there are still relatively few of them.

“If they’re just moving through, they may not be as prone to direct competition, or bullying of the gray foxes, or their movements are hard for the gray foxes to predict,” Parsons said. “We also think gray foxes might not have a good way to avoid coyotes consistently in suburbs, since habitat is scarce, or avoidance isn’t necessary given abundant suburban resources.”

In rural areas, the two species were less likely to be seen together. However, gray foxes were more likely to inhabit a site as tree cover increased.

“Gray foxes are very good at climbing trees; they have sharp claws,” Kays said. “They’re one of the only dog relatives that can climb trees. Coyotes can’t. It could be that climbing trees helps them deal with coyotes.”

Overall, researchers said findings for rural areas suggest gray foxes could be at risk in areas with few houses and little tree cover.

“In rural areas, where we’re seeing gray foxes spatially and temporally avoid the coyotes, that’s where we could see some impact on the gray fox population,” Parsons said. “It could mean the coyote is outcompeting, bullying or even killing gray foxes there. A strong competitive relationship may result in gray foxes not being able to access high quality areas, forcing them to establish themselves elsewhere where resources may not be as abundant. That could be a mechanism behind a decline.”

They found an important benchmark of tree cover is important for gray foxes in rural areas: Tree cover in more than 50% of a 1-kilometer radius resulted in gray foxes being more likely to occupy a site.

Adjusting the balance of X-chromosome dosage

“Enhancing and preserving tree cover as much as we can is going to be beneficial for gray foxes,” Parsons said.

Researchers said another takeaway is that humans can impact how species are able to adapt and coexist.

“There are things we can do to change the ways wildlife species are able to adapt to human-dominated environments,” Parsons said. “Reducing habitat fragmentation and preserving forest and green spaces can help enhance the ability for these species to coexist.”

The relationship is evolving over time, they added, and could change. Researchers are continuing to study the populations of the two species over the long term.