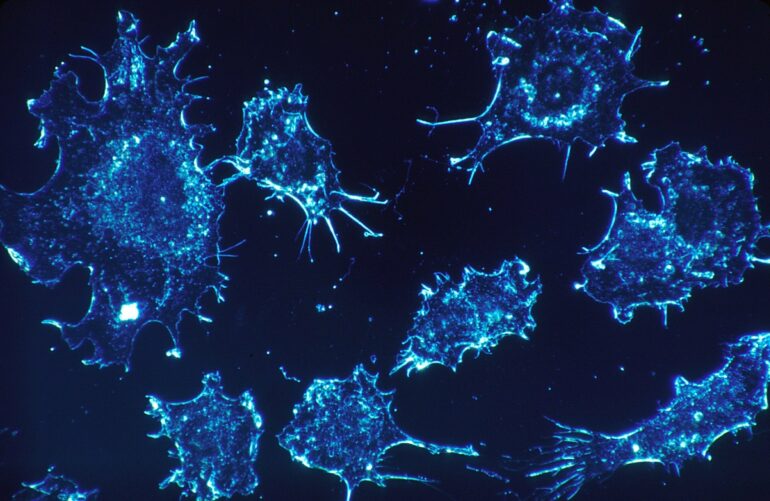 Scientists at Emory have revealed widespread distortions of a cell’s protein interaction machinery resulting from cancer-causing mutations. They developed a process resembling ground-penetrating radar, for its ability to map the hidden landscape of anti-cancer drug opportunities.

The results are published in Cell.

“One reason why a mutation is tumorigenic is the altered network of protein-protein interactions,” says lead author Haian Fu, Ph.D., professor and chair of pharmacology and chemical biology at Emory University School of Medicine. “The mutation may form a new epitope: a new interaction surface. Such a single protein residue alteration can rewire the cell, leading it down the path of an oncogenic program.”

In a case study, researchers show how a common mutation in the gene BRAF—V600E, found in most melanomas, as well as lung and colon cancers—triggers a new interaction between the BRAF-encoded protein and a redox regulator protein KEAP1. Other aspects of how V600E warps cell metabolism have been studied, but this interaction was not previously known.

As a result of the mutation and KEAP1 sequestration, cancer cells produce more of the redox enzyme NQO1. This creates an opportunity to poison the cells by feeding them a compound the enzyme converts into something toxic. Taking advantage of this vulnerability, researchers found that BRAF-mutated cells were more sensitive to the compound DNQ (deoxynyboquinone).

There were already targeted therapies aimed at the BRAF V600E mutation, such as vemurafenib, which was FDA-approved in 2011. However, cancers vary in response to drugs like vemurafenib and most eventually develop resistance. The information in the study could illuminate new tactics for overcoming resistance to those types of medications, or other weak links in the BRAF pathway.

“Cancer genomics initiatives have collected a vast amount of data about cancer-associated mutations,” Fu says. “The challenge is: for a given mutation, how do we rapidly translate that knowledge into more mechanistic understanding and genotype-directed cancer therapies? This is one way we can move toward that goal.”

The researchers detected altered interactions by harnessing engineered proteins, originally derived from jellyfish and a deep-sea shrimp. Scientists can detect when the two proteins come within 10 nanometers of each other in living cells, using a combination of bioluminescence and fluorescence (BRET or bioluminescence resonance energy transfer). The interaction test can then be performed on a large scale with a robot, on thousands of cancer-associated protein pairs.

To pinpoint single residue change-induced neoPPIs, the research team tested the ability of a mutated protein to bind a cancer-associated protein in comparison with its wild type counterpart. A computational algorithm was integrated to expose mutation-enabled interactions. Researchers also checked their results by verifying whether the two proteins in question, such as BRAF and KEAP1, actually interact in relevant cancer cells using other biochemical and cellular tests.

The researchers extended this study and mapped altered protein-protein interactions resulting from mutations in other cancer-associated genes such as P53, PTEN and EGFR, and have made the data available to the cancer research community. Fu notes that the described approach can also be utilized to identify neoPPI targets enabled by mutations that are critical for other human diseases.