‘Veggie’ dinosaurs differed in how they ate their food 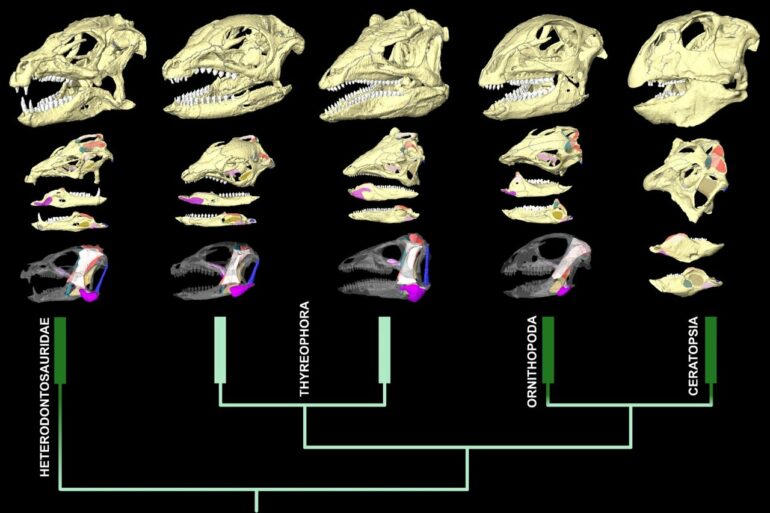 Although most early dinosaurs were vegetarian, there were surprising differences in the way that these animals tackled eating a plant-based diet, according to a new study by scientists from the Natural History Museum and the Universities of Bristol and Birmingham.

Five skulls from the plant-eating group Ornithischia provided the key to unlocking their feeding habits: Heterodontosaurus, Lesothosaurus, Scelidosaurus, Hypsilophodon and Psittacosaurus—earliest representatives of what would become the major herbivore dinosaur groups.

Later ornithischian dinosaurs, like Triceratops and Stegosaurus, show a wide range of adaptations to eating plants, yet their early relatives had not been examined properly until now.

Publishing their findings in the journal Current Biology, the scientists reveal that the early “veggie” dinosaurs had evolved very different ways to tackle a diet of plants.

Heterodontosaurus appears to have had large jaw muscles relative to its skull size—producing a high bite force, ideal for consuming tough vegetation. Scelidosaurus had a similar bite force, but relatively smaller jaw muscles compared to its skull. However, these animals had a greater overall body size and could achieve a strong bite. In contrast, the Hypsilophodon skull didn’t have big muscles. Instead, these dinosaurs reoriented their muscles to bite more efficiently but with less muscle force.

Dr. Stephan Lautenschlager, from the University of Birmingham, said, “We discovered that each dinosaur tackled the problems posed by a plant-based diet by adopting very different eating techniques. Some compensated for low eating performance through their sheer size, whilst others developed bigger jaw muscles, increased jaw system efficiency, or combined these approaches. Although these animals looked very similar, their individual solutions to the same problems illustrates the unpredictable nature of evolution.”

Contrary to popular belief, most dinosaurs were plant eaters, although they are all descended from a carnivorous ancestor. Much is already known about how different dinosaurs consumed their food, but relatively little is understood about how they evolved their preferred eating styles.

After CT scanning the skulls, the team reconstructed the jaw muscles using data from birds and crocodiles to help indicate where the muscles would have been. They then carried out a “finite element analysis,” which involves dividing the skull into thousands of individual parts (called elements). The bite force that these muscles can generate is calculated based on their size and arrangement.

Each skull was then simulated to bite an imaginary object to see how the different elements respond to the applied force. These models generate heat maps showing the areas of the skull that are strongly stressed and those that are not very stressed. The results revealed that although all of these dinosaurs were eating plants, they each had different ways of doing it.

Senior author and paleontologist at the Museum of Natural History Professor Paul Barrett added, “If you want to understand how dinosaurs diversified into so many different types so effectively, it’s critical to learn how they evolved to feed on a such a wide variety of vegetation in so many ways. This diversity in feeding mechanisms set them up to dominate life on land for millions of years to come.”

One step closer to tackling drug resistant parasites in Brazil

Dr. David Button, lead author of the study, who conducted the work at the Museum but is now a researcher at the University of Bristol’s School of Earth Sciences, said, “When we compared the functional performance of the skull and teeth of these plant-eating dinosaurs, we found significant differences in the relative sizes of the jaw muscles, bite forces and jaw strength between them. This showed that these dinosaurs, although looking somewhat similar, had evolved very different ways to tackle a diet of plants.

“This research helps us understand how animals evolve to occupy new ecological niches. It shows that even similar animals adopting similar diets won’t always evolve the same characteristics. This highlights how innovative and unpredictable evolution can be.”


Citation:
‘Veggie’ dinosaurs differed in how they ate their food (2023, January 4)