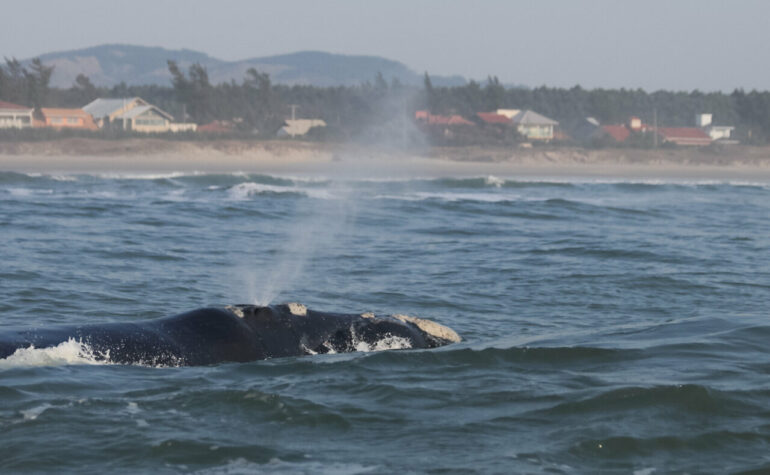 Sitting on a beach looking out to sea, it may seem unusual to spot one of the world’s largest animals swimming in shallow coastal 30-foot-deep waters. But each winter, female southern right whales migrate thousands of miles to bay habitats to give birth and care for their young. So why do they choose such shallow nursery grounds that may be within dangerous proximity to human activity and where food supply is scarce?

While researchers have speculated that the up to 50-foot-long whales choose these locations for lack of predators and warmer and calmer waters, a team of biologists from Syracuse University’s Bioacoustics and Behavioral Ecology Lab recently uncovered a new potential motive. They hypothesize that shallow, sandy, near-shore waters are a prime spot for whales to birth and raise their young because those areas have reduced acoustic propagation, meaning vocal signals don’t travel as far at these sites, allowing whale mothers to communicate with their nearby young, while not being heard by predators off in the distance.

Since questions remain about why baleen whales migrate such long distances every year, the research team says their results shed new light on their migratory behavior. Understanding habitat use and selection also allows researchers to better focus conservation and management efforts, which is critical for endangered whale species like the right whale in the North Atlantic.

Authors Julia Zeh and Julia Dombroski, both Ph.D. candidates in biology in the College of Arts and Sciences (A&S), and Susan Parks, associate professor of biology and principal investigator of the Bioacoustics and Behavioral Ecology Lab in A&S, gathered data at three nursery sites across three continents in the southern hemisphere (South America, Africa and Australia) where southern right whale nurseries are commonly spotted. In their paper, published in Royal Society Open Science, they found that the depth at which right whale mothers and their young are often observed has the most limited acoustic detection range for their calls.

“Animals that communicate using sound must balance the need to be heard by their intended audience and the risk of being overheard by eavesdroppers such as predators,” says Zeh.

Changes to sound production behavior to reduce detectability by eavesdroppers is known as acoustic crypsis. Southern right whales have commonly used three forms of acoustic crypsis to avoid predators: reduction in call amplitude; using signal frequencies that are difficult for eavesdroppers to detect and/or localize; and reduction or complete ceasing of acoustic signal production, effectively going silent to avoid detection.

In their paper, the team propose a fourth method of acoustic crypsis centering around southern right whales’ habitat choice.

Future research will be aimed at determining how common a habitat selection approach to acoustic crypsis may be.