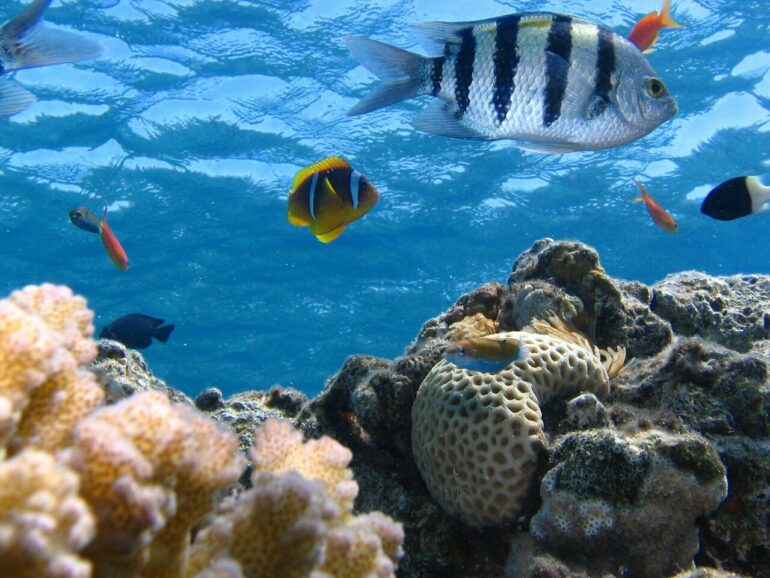 What a tangled web we weave. When it comes to the impact of the climate crisis on marine food webs, we apparently have not known the half of it. That’s according to a new University of Nevada, Las Vegas (UNLV) study, which compared ancient and modern ocean ecosystems in a bid to understand how to make them healthier and more resilient.

Some scientists claim that food webs in the oceans have seen very little change over the last 540 million or so years. However, a team of UNLV researchers has revealed that some ancient food webs were actually very different from those of today.

The study, published in the latest edition of the journal Frontiers in Ecology and Evolution, used fossils to rebuild four different marine food webs from the days when dinosaurs roamed the earth over 65 million years ago. The food webs were also compared to a reconstructed food web from a modern Jamaican reef. The result? The four ancient food webs varied greatly from one another, and the youngest one was not the most similar to today’s Jamaican coral reefs.

Researchers say the findings point to big changes in the structure of marine ecosystems since they first evolved, and that when looking at conservation and restoration plans, damage to these structures over time caused by humans can impact the ability to fix imbalances and ward off extinction of the species living within them.

“Learning how food webs work is very important for conservation because it helps scientists predict how ecosystems will respond to climate change,” said study co-author Carrie Tyler, a marine conservation paleobiologist and assistant professor in the UNLV department of geoscience.

“There is an interconnectedness and dependency between each member, which means when a stressor affects one species, it will ultimately affect the rest of the web,” she said. “If a species is removed from the structure, the function in the food web may no longer be fulfilled because of the missing piece.”

Tyler said this can make it difficult to reintroduce species down the road, as their functions may no longer fit into the structure. “Using paleontology in this way can help us understand what we should be saving and how to save it, giving us another way to look at conservation efforts.”

Added Roxanne Banker, a UNLV postdoctoral researcher working with Tyler, “By studying these structures over time, we can find ways to promote more resilient communities now, and in the future.”

Climate change and altered ocean ecosystems due to human activity are of increasing concern. “No pristine ecosystems—those unaltered by human activity—are left on the planet,” Tyler said. Community stability in ocean ecosystem structures is determined by which species are in it, what role they play in moving energy, how those functions interact with each other, and how strongly the animals at the top of the food chain affect the rest of the food web. Researchers are looking at how these systems respond to crises and whether or not the species and functions can survive these stressors. The new UNLV research can help researchers identify long-term effects of biological invasion—such as the introduction of new species and/or predators, as well as other disturbances in the environment—to determine how we can better help ocean ecosystems bounce back from damage. By looking at things over a longer time scale, we can develop a more specific understanding of how human activity has affected ecosystems, which can help us approach restoration and conservation efforts more effectively.


Citation:
What ancient underwater food webs can tell us about the future of climate change (2022, November 28)