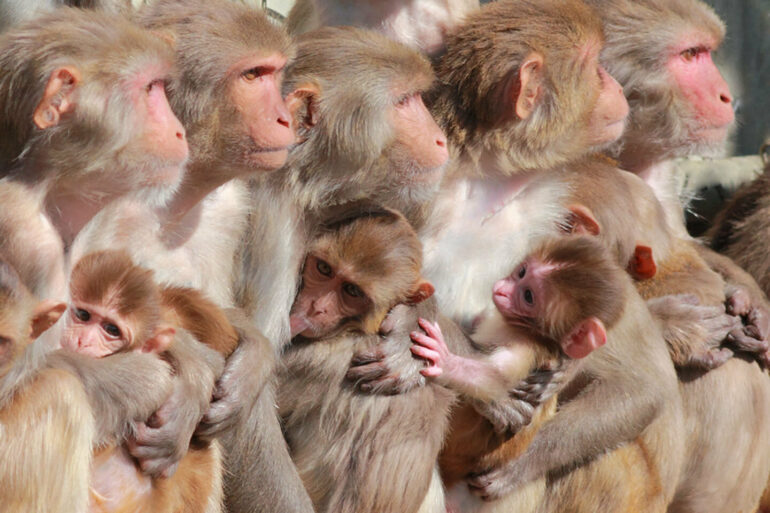 Infant monkeys conceived while their mothers were naturally exposed to wildfire smoke show behavioral changes compared to animals conceived days later, according to a new study from researchers at the California National Primate Research Center at the University of California, Davis. The work is published April 1 in Nature Communications.

The findings show the importance of timing in effects of smoke exposure on pregnancy and suggest a teratogenic, or developmental mechanism, said senior author Bill Lasley, professor emeritus of population health and reproduction at the UC Davis School of Veterinary Medicine and Center for Health and Environment.

“I think this will have an effect on future studies of exposures in pregnancy, because we’ll know when to look,” Lasley said. Existing studies of environmental exposures during pregnancy in humans are mostly retrospective, and women may not even realize they are pregnant until weeks into the first trimester, he said.

The Camp Fire, which began Nov. 8, 2018, provided a natural experiment in smoke exposure. It blanketed the Davis area, some 100 miles away, with smoke at the peak of breeding season for rhesus macaques housed in outdoor corrals at the California National Primate Research Center.

John Capitanio, professor of psychology at UC Davis and a core scientist at the CNPRC, has been conducting standardized assessments on animals born at the Center for two decades. At about 3-4 months old, the young monkeys are assessed on a variety of cognitive and behavioral tests. While the number of animals conceived during the Camp Fire that were assessed was fairly small, they could be compared not only to each other (exposed vs. not exposed), but also to the historical data from hundreds of animals.

On assessment, the smoke-exposed infants showed increases in a marker of inflammation, a reduced cortisol response to stress, memory deficits and a more passive temperament than other animals, Capitanio said.

“It’s a mild effect across a variety of domains of psychological function,” Capitanio said. The effects are consistent with those found in studies of prenatal exposure to air pollution, he said. Comparison between the groups and with animals born in other years shows that the results are not due to the timing of conception (earlier versus later in the breeding season).

The findings suggest that some component of wildfire smoke can act as a teratogen, affecting fetal development, Lasley said. That component could be airborne hydrocarbons such as phthalates, which were found in the smoke plume from the Camp Fire.

Unlike other mammals, the placenta of primates such as humans and rhesus macaques produces hormones that support brain development through the adrenal system, he said.

“Since fetal adrenal glands are the source of cortisol and other steroids for neurologic development, which determines behaviors, a scenario of a placenta-adrenal-brain axis could be the causal pathway,” Lasley said.

Lasley is beginning a prospective study with women with implanted embryos as a result of in vitro fertilization, as the time of conception is exactly known if the women are incidentally exposed to wildfire smoke or other pollutants.

A previously published study on the same group of animals by Bryn Wilson, an OB/GYN resident at UC Davis Health in collaboration with Lasley and Professor Kent Pinkerton, UC Davis Center for Health and Environment, found a slight, but not statistically significant, decrease in the rate of live births in the affected cohort.

Additional authors on the paper are Laura Del Rosso, California National Primate Research Center and Nancy Gee, UC Davis Center for Health and Environment. The work was supported by grants from the NIH.