Wildlife study: Cheetah marking trees are hotspots for communication among other species as well 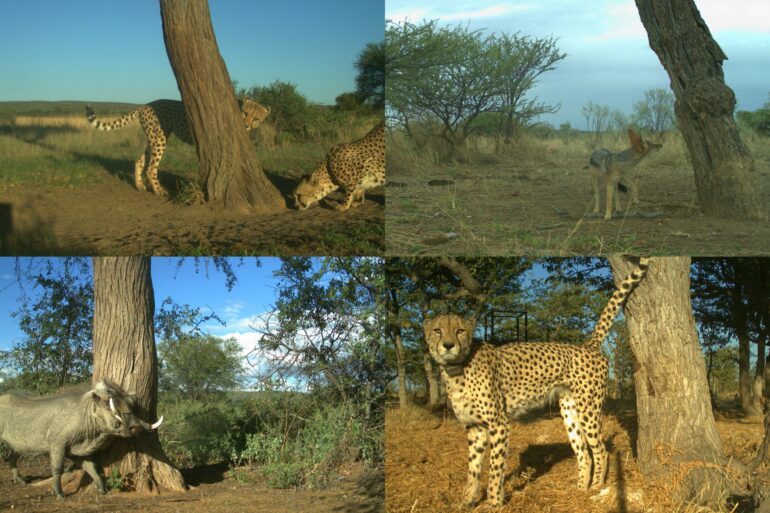 Marking trees are important hotspots of communication for cheetahs: Here they exchange information with and about other cheetahs via scent marks, urine and scats. A team from the Cheetah Research Project of the Leibniz Institute for Zoo and Wildlife Research (Leibniz-IZW) now showed that several mammalian species on farmland in Namibia maintain a network for intra- and interspecific communication at cheetah trees.

Black-backed jackals, African wildcats and warthogs visited and sniffed the cheetahs’ “places to be” more frequently than control trees, the team concluded from photos and videos recorded by wildlife camera traps in a paper in the scientific journal Mammalian Biology. A common prey species of the cheetahs, however, avoided these hotspots.

Many mammalian species use scent marks, urine or scats to communicate with each other. By doing so, animals leave, receive and exchange information on territory ownership, reproductive receptiveness, health status or diet. Whether and how such olfactory communication is also used by other species than the one having placed the information is not well understood.

Other species exchanged information at the same frequency at cheetah marking trees and control trees. This indicates that they used prominent trees for their own communication. The scientists concluded that mammals on Namibian farmland maintain communication networks within and between species

“Warthogs on the other hand are omnivores and opportunistic scavengers, so they might also feed on undigested prey remains in cheetah scats. Additionally, warthogs are the only species that left olfactory information and did this at the same frequency at cheetah marking and control trees. This suggests that warthogs use large trees as sites for their own communication,” Edwards adds.

“Although leopards visited the trees less than 20 times, it is possible that they used conspicuous trees for their own olfactory communication and at the same time demonstrated at cheetah marking trees their presence towards cheetahs,” says Dr. Bettina Wachter, senior author of the paper and head of the Cheetah Research Project.

Interspecific communication has mainly been described between prey and predator or between carnivore species. It often involves prey animals or small carnivores that sniff at markings from predators. While prey animals normally do not mark at predator marking sites, small carnivores and other predator species might counter-mark existing scent marks. If counter-marking is done at conspicuous sites, it might be directed to conspecifics rather than to different species.

“In our investigation, we monitored nine cheetah marking trees and nine similar looking control trees nearby on farmland in central Namibia with wildlife cameras. These trees were all conspicuous, isolated, prominent specimens, typical for cheetah marking trees. We used this paired tree setup to investigate whether mammalian species visit these trees for interspecific and/or intraspecific communication,” explains Dr. Jörg Melzheimer, initiator of the wildlife camera trap survey.

By using a paired survey design, the scientists demonstrated that some species gain important information from other mammalian species. “Thus, it is likely that mammals maintain communication networks across species,” Wachter and Melzheimer conclude.

Ancient lineage of algae found to include five ‘cryptic’ species

“These networks might be laid out along cheetah marking trees and also along communication locations of other species such as latrines of brown hyenas or spotted hyenas. Investigations on the interspecific communication of various species in different populations and ecosystems will likely uncover more details on the complexities of communication networks.”

In a previous paper, Melzheimer, Wachter, and colleagues showed that marking trees are important hotspots of intraspecific communication for cheetahs and how they work. They used this to demonstrate that detailed knowledge of the spatial ecology and communication of the big cats can help reduce human-wildlife conflicts. This work was published in December 2020 in the Proceedings of the National Academy of Sciences.


Citation:
Wildlife study: Cheetah marking trees are hotspots for communication among other species as well (2022, December 2)