Wood-eating clams use their poop to dominate their habitat: Study 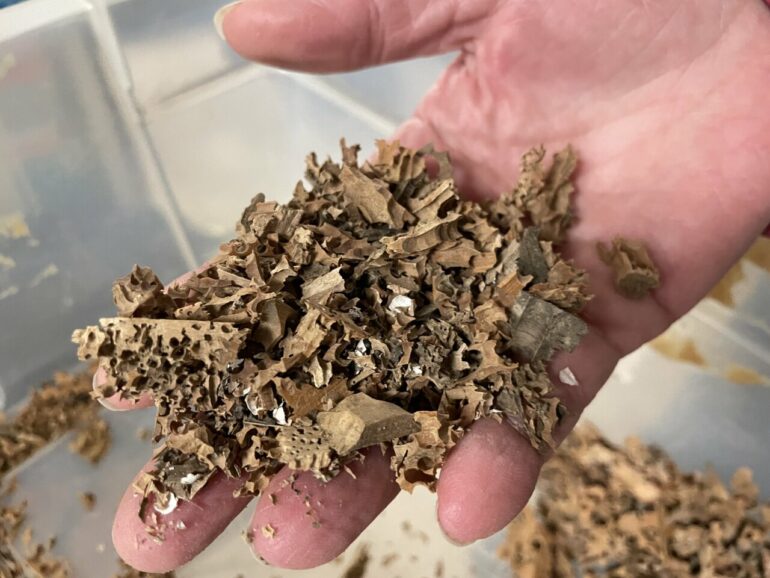 Deep beneath the waves, tiny clams with shells usually about as big as a pea bore into pieces of sunken wood. The wood is food for them, as well as a home. These rare, scattered, sunken pieces of wood support miniature ecosystems where different wood-boring clam species can live in harmony for years. But in a new paper in Marine Biodiversity, researchers found that one group of wood-boring clams has evolved a unique way to get the wood all for itself: building chimneys made of poop.

“There are two challenges every sea creature has to face: getting pure water in, so you can get oxygen to your gills, and getting rid of your waste. Because nobody wants to live in their poop. But here are these clams living with theirs, and actually thriving,” says Janet Voight, Associate Curator of invertebrate zoology at the Field Museum and the study’s lead author.

Scientists can put wood on the seafloor, return months or even years later, and recover it with “an amazing array of animals,” says Voight; other times wood that has been submerged for the same amount of time comes up so gnawed and bored-through that you can crumble it in your hand. This difference was a mystery, and Voight wanted to know why.

She took stock of the wood-boring clam species present in reports of sunken wood from all over the world, and she noticed a pattern. “There are six main branches in the wood-boring clam family tree, and every woodfall that was bored so heavily it was crushable by hand turned out to have been bored by a species from the same single branch of that family tree,” says Voight.

She says she was surprised by this finding— “that’s not supposed to happen, you just assume that all wood-boring clam species, which tend to look pretty similar, bore into wood the same way. And yet, here’s one group that’s doing something totally different.”

Scientists had suggested that the extra-chewed-up wood was due to lots of larvae happening to be present nearby, or warmer water temperatures, but it turns out, the very nature of the clams may be responsible. Voight noted all of these extra-efficient, related species have a common trait where the sun don’t shine. As the clams dig and move into their boreholes in the wood, they fill the space around them inside the holes with their own feces.

“They don’t do it on purpose, their anatomy makes them do it,” says Voight. “When these clams bore into wood, their little shell does the boring.” Meanwhile, the clams’ siphons, tubular appendages for taking in water to get oxygen and expelling waste, stick out behind them. “In most wood-boring clams, these two ‘in and out’ siphons are equal in length and stick out into the water column,” says Voight.

“But in these related hyper-nasty borers, the siphon for expelling de-oxygenated water and feces is short; it stays inside the borehole in the wood. As a result, says Voight, “they poop in their borehole. They just have to, unless they really, really push.” The waste stays right there with the clam, forming a chimney that wraps around the siphon.