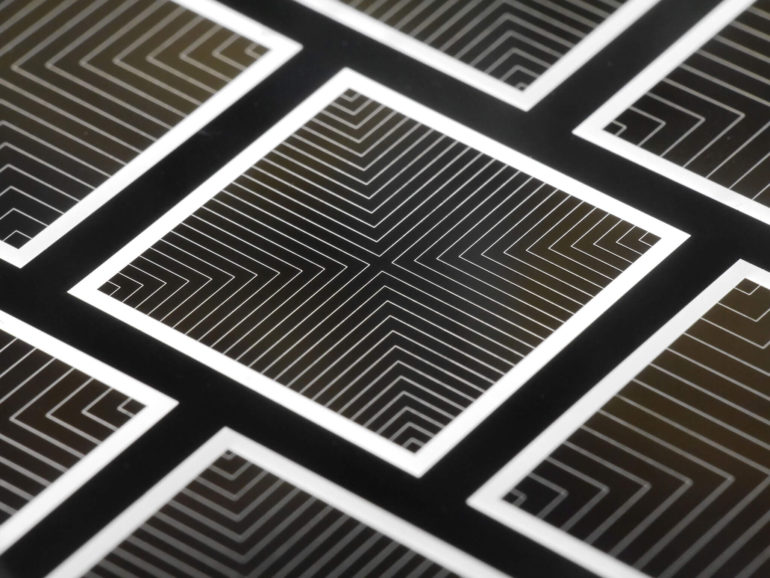 A team of researchers led by Dr. Armin Richter of the Fraunhofer Institute for Solar Energy Systems ISE achieved a record conversion efficiency of 26.0 percent for both-sides contacted silicon solar cells. In the recently published Nature Energy article “Design Rules for High-Efficiency Both-Sides-Contacted Silicon Solar Cell with Balanced Charge Carrier Transport and Recombination Losses,” Richter explains the structure of the record-breaking cell and presents fundamental design-related aspects leading to even higher efficiencies. The design of the back-side cell surface as a full-area charge-carrier collecting passivating contact was key to the success.

With a share of over 90 percent, solar cells made of crystalline silicon dominate the global photovoltaic market. Thanks to technological advances in recent years, their efficiency has already come very close to the theoretical efficiency limit of crystalline silicon (29.4 percent). Previously, record efficiencies of around 26 percent were limited to solar cells with both metal contacts at the rear, the so-called interdigitated back contact, or IBC, solar cells. Both-sides-contacted solar cells, however, have been established as the industry standard and have become the preferred choice in industrial production due to their lower complexity.

With a new approach for both-sides contacted cells, the solar cell researchers at Fraunhofer ISE show that it is also possible to achieve the highest efficiencies for this type of solar cell.

The basis for the record cell is the TOPCon technology (Tunnel Oxide Passivating Contact). Developed at Fraunhofer ISE, this technology combines the advantages of very low surface recombination losses with efficient charge carrier transport. While industrial standard cells have a pn junction on the front side, the pn junction in the record cell was formed on the back side as a full-surface TOPCon contact. Thus, the full-surface boron doping on the front side was no longer required so that only a local boron diffusion directly under the front-side contacts was implemented.

This TOPCoRE cell (TOPCon Rear Emitter Solar Cell) allows higher voltages and higher fill factors than cells with a collecting emitter on the front side.

With this cell design, the wafer can be better utilized for charge carrier transport and the front side is more effectively passivated, for which aluminum oxide is used.

Detailed power loss analysis shows that this cell generally compensates for and minimizes both electron and hole transport losses as well as transport and recombination losses.

“Based on a systematic simulation-based analysis, we were able to derive some fundamental design rules for future high-efficiency silicon solar cells above 26 percent efficiency. Both-sides-contacted solar cells have the potential to reach efficiencies up to 27 percent and thus surpass the previous world record for silicon solar cells,” explains Prof. Stefan Glunz, Division Director of Photovoltaics Research at Fraunhofer ISE.

This cell structure, developed at Fraunhofer ISE, has a major advantage in that the subsequent production step—connecting the solar cells to form a module—can be based on existing technologies, thus allowing the use of many standard techniques.

Solar cells: Losses made visible on the nanoscale

Samsung Galaxy S21 colors: every shade available including S21 Plus and S21 Ultra

In CompaniesSmartphones
on 15 January 20215 min read