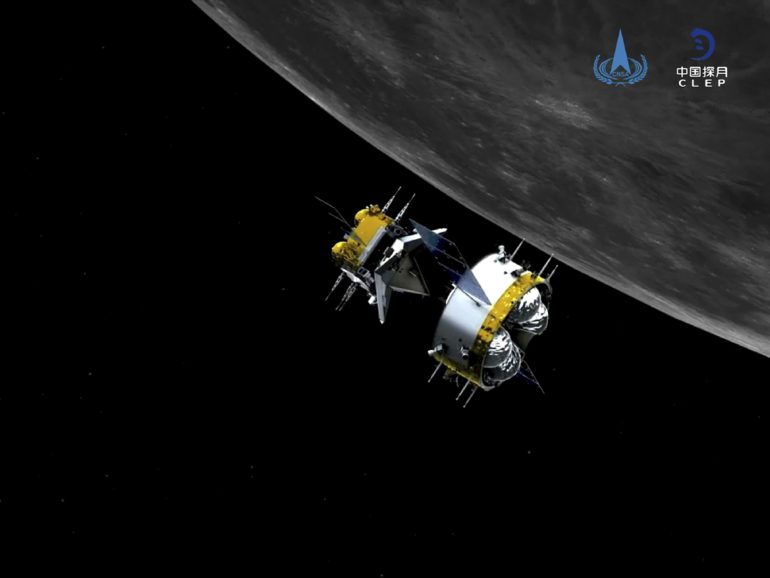 A Chinese space capsule bringing back the first moon rocks in more than four decades started its three-day return to Earth on Sunday.

The Chang’e 5 lunar probe, which had been orbiting the moon for about a week, fired up four engines for about 22 minutes to move out of the moon’s orbit, the China National Space Administration said in a social media post.

The craft’s lander touched down on the moon earlier this month close to a formation called the Mons Rumker, an area believed to have been the site of ancient volcanic activity. It collected about 2 kilograms (4.4 pounds) of samples.

The return capsule is expected to land in northern China in the Inner Mongolia region after separating from the rest of the spacecraft and floating down on parachutes. The material would be the first brought back since the Soviet Union’s Luna 24 probe in 1976.

The rocks and other debris were obtained both by drilling into the moon’s crust and scooping directly off the surface. They may be billions of years younger than those brought back by earlier U.S. and Soviet missions, possibly offering insights into the moon’s history and that of other bodies in the solar system.

China has set up labs to analyze the samples for age and composition and is also expected to share some of them with other countries, as was done with the hundreds of kilograms (pounds) brought back by the U.S. and former Soviet Union.

China’s space program has a series of ambitious missions underway, including a probe en route to Mars. The Chang’e lunar program, named after the ancient Chinese moon goddess, has been operating the Chang’e 4 probe on the moon’s less explored far side for the past two years.

Future plans call for returning a human to the moon and perhaps a permanent moon base. China is also building a space station to begin operating as early as 2022.

Samsung robot feeds you and helps with the laundry