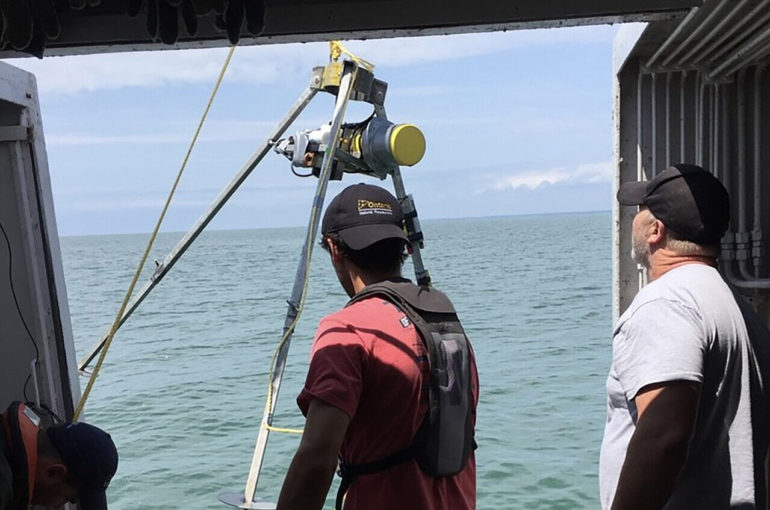 Powerful gusts linked to global warming are damaging water quality and creating a hazard for fish in Lake Erie and perhaps elsewhere in the Great Lakes, according to researchers.

Extremely high winds occasionally churn up deep water with low oxygen and high levels of phosphorus in Erie’s central basin and shove it into the shallower western section, creating a hazard for fish and insects on which they feed.

Such events have happened more frequently since 1980 and particularly in recent years, scientists with the University of Guelph said in a paper published last week in the journal Nature Scientific Reports.

“As temperatures increase overall, we will get higher winds and larger waves,” said Josef Ackerman, a professor of physical ecology and aquatic sciences with the Canadian university who led the study.

The findings underscore the need to limit phosphorus overloading that fuels algae-like bacterial blooms in Lake Erie’s western basin, he said—an elusive goal despite pledges by Michigan, Ohio and the Canadian province of Ontario to achieve a 40% reduction from 2008 levels by 2025.

“We can’t control the winds but maybe we could double down on our efforts to reduce inputs into the lakes to keep the ecosystems healthy,” Ackerman said. “If so, the winds won’t have as bad an impact.”

Marc Gaden, spokesman for the Great Lakes Fishery Commission who didn’t take part in the study, said it illustrates the complexity of Great Lakes ecosystems and the need for better models that can forecast how weather can disrupt them.

“Any change that’s happening like this needs to be understood by fishery managers who are making decisions on a daily basis about stocking and harvests,” Gaden said Monday.

The report adds to a growing body of scientific evidence that human activity is affecting the Great Lakes in unforeseen ways.

Some nearshore areas have too much phosphorus because of runoff from overfertilized croplands and releases from sewage plants. In others, invasive quagga mussels that were brought to the lakes in ship ballast water are trapping the nutrient in shallow waters.

Yet deeper areas of Lake Michigan, Lake Huron, Lake Ontario and eastern Lake Erie are running short of phosphorus needed to feed algae that form a key link in food chains. Again, the mussels are suspected of playing a role.

A February study by University of Minnesota Duluth scientists found that quagga mussels, which filter phosphorus from the water and then excrete it, have become the biggest factor in determining concentrations of the nutrient in all the Great Lakes except Lake Superior.

Meanwhile, climate change resulting from emissions of greenhouse gases such as carbon dioxide and methane is believed to be warming the lakes and causing heavier storms, which also affect water quality.

Lake Erie, shallowest of the Great Lakes, is deep enough in its central basin to have two distinct temperature levels. The lower, colder level has little oxygen and lots of phosphorus. Low or depleted oxygen, a condition known as hypoxia, can cause fish die-offs.

Unusually strong winds, which usually happen in August, can be powerful enough to propel that unhealthy water into the western basin even though Erie’s prevailing current moves eastward, Ackerman said.

Those extreme events, which formerly happened a couple of times a year, more recently have happened three or four times annually, he said. In the past decade, they’ve increased more than 40 percent. They can alter lake chemistry within hours.

While adult fish can swim away from those low-oxygen, high-phosphorus zones, younger ones might be trapped and die, Ackerman said. Another victim is the mayfly, an important food for prized fish such as perch and walleye.

He said extreme gusts also might have similar effects in other waters that have experienced hypoxia, such as Lake Huron’s Saginaw Bay, Lake Michigan’s Green Bay and Muskegon Lake, which opens into Lake Michigan.