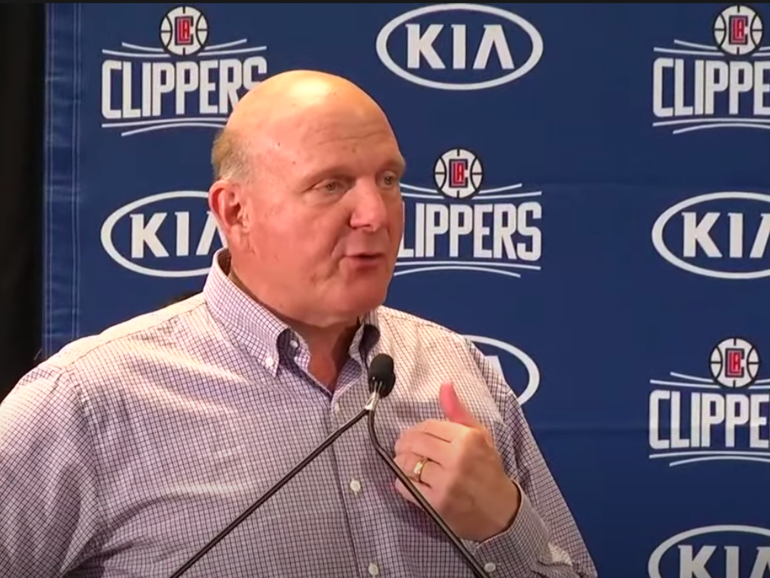 You remember the rabid enthusiasm.

And you try to forget how he laughed at the idea that Apple could make a successful phone.

Steve Ballmer’s life has surely been interesting, if not always garlanded with absolute success.

This week, however, the former Microsoft CEO ascended to a place that few may have imagined.

In a poll of senior people in and around the NBA, Ballmer was voted the best owner in basketball.

The poll, conducted by The Athletic, saw Ballmer rise far above the rim of NBA ownership, ascending to a level of respect few might have imagined when he first bought the Los Angeles Clippers a mere six years ago.

The Clippers, after all, were a joke. A bad, sad joke. They were owned by Donald Sterling, who was banned for life by the NBA for racist comments. They were also a routinely terrible team, where players went to wilt. Only in the last couple of years of Sterling’s ownership did they begin to show signs of (playing) competence.

Yet Ballmer wafted in, offered ever more ludicrously peculiar bodily movements during games, and went about creating something respectable and even admirable.

Their playoff record remains disappointing. They haven’t gone beyond the conference semi-finals.

In The Athletic’s survey, however, Ballmer is described as an owner who “will spend unapologetically and pays,” which sounds like only some tech executives I know.

Of course, Ballmer has a few advantages. He’s the richest owner in the NBA. He’s also bought the old Forum where he hopes to give his team an actual brand identity, away from sharing an arena with the constantly bloviating Los Angeles Lakers. (Disclosure: Golden State Warriors fan.)

Of course, there’s some suspicion that Ballmer has bought his adoration. An NBA agent commented: “Ballmer is the best because it’s, ‘Hey Steve, we need this’. OK, boom.”

Still, he’s not the only tech executive to become an NBA owner.

The Dallas Mavericks’ Mark Cuban has owned his team for, can it really be, 20 years. Those who have played for him say he was a pioneer in making sure the players were treated especially well. And, indeed, in this survey Cuban placed handily at No. 3, ahead of the constantly successful and occasionally boasty Warriors’ owners Joe Lacob — a Kleiner Perkins partner — and entertainment executive Peter Guber.

So tech executives really do know how to run things, right? Even in sports? Not entirely, it seems.

For at the bottom of The Athletic’s list wasn’t the routinely mocked New York Knicks owner James Dolan. It was another man of tech — Sacramento Kings owner Vivek Ranadive.

Ranadive is the founder and former CEO of Tibco software. He built the Kings a new arena in downtown Sacramento. It is, at least of all the NBA arenas I’ve wandered into, the very best for being able to truly enjoy the game and the view outside. (And, with the erratic nature of the Kings, sometimes you really need the view outside.)

Intel just signed a major chip-making deal with the Pentagon, and it could help the US solve its semiconductor problem

Yet within NBA circles Ranadive is said to be — at least according to this survey — not the finest of leaders. He’s owned his team a year longer than has Ballmer. Yet general managers and coaches have breezed through the Kings like coastal squalls.

There’s no true reason why former tech executives should instinctively know how to run a sports franchise. Some may have relied on engineers and their technology. Some may have merely got lucky.

They may not be used to dealing with the more mercurial, occasionally demanding nature of NBA players. Professional sports are also fickle by their very nature. A vital player gets injured and suddenly your team isn’t what it was — as Lacob and the Warriors found out in recent times.

Still, when some tech executives have money they believe they can do anything. (Actually, some believe that even before they have money.) At least Ballmer seems to be putting heart and soul in the same place as his bank account,

I wonder if his Clippers will win the NBA title this season — which begins on Tuesday. They have stars in Kawhi Leonard and Paul George. They have a new coach in Tyronn Lue. They have the best owner in the NBA.

It’s still worth admiring what Ballmer has achieved in his six years. It can’t be easy leading in the shadow of a far more popular, sexier, more lovable (to many, unaccountably) brand in the Lakers.

Then again, Ballmer had quite some practice at that when he was at Microsoft.