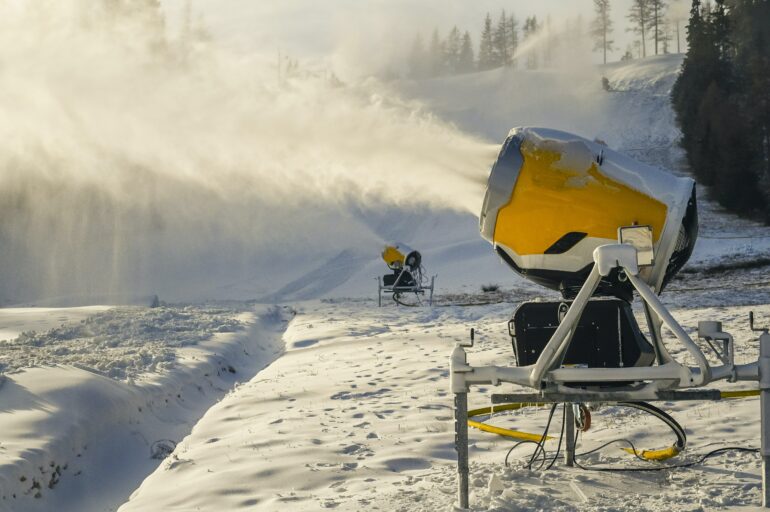 The winter Olympics conjure up images of snowy mountain ranges, frozen ice rinks and athletes in cold-weather gear. And for good reason. Winter Olympic venues have often been in places that receive an average snowfall of 300 inches per year or more.

However, barring some extremely anomalous weather patterns, the mountains surrounding the snow events for the Beijing Winter Olympics will be tones of brown and green and nearly devoid of snow. The region typically receives only a few inches of snowfall in each winter month. This means that basically all of the snow the athletes will be competing on will be human-made.

I am an atmospheric scientist who specializes in mountain weather and snow. I am also the founder of a snowmaking startup and an avid skier. There are distinct differences between natural and artificial snow, and it will be interesting to see if these differences have any effect on competition.

How to make fake snow

Though artificial snow and natural snow are both frozen water, most skiers and snowboarders are able to immediately recognize that the two are very different.

Traditional snowmaking uses high pressure water, compressed air and specialized nozzles to blow tiny liquid droplets into the air that then freeze as they fall to the ground. But snowmaking is not as simple as just making sure the air is sufficiently cold.

Pure water does not freeze until it is cooled to nearly -40 F (-40 C). It is only the presence of microscopic suspended particles in water that allow it to freeze at the familiar 32 F (0 C). These particles, known as ice nuclei, act as a sort of scaffolding to help ice crystals form.

Without these particles, water struggles to turn into ice. Different particles can raise or lower freezing temperatures depending on their specific molecular configuration.

Two of the best ice nuclei are silver iodide and a protein produced by the bacteria Pseudomonas syringae. Most snowmaking systems add a commercial form of the bacterial protein to water to ensure most of the tiny droplets freeze before they hit the ground.

Natural snow starts as a tiny ice crystal on an ice nucleus in a cloud. As the crystal falls through the air, it slowly grows into the classic six-sided snowflake.

By comparison, human-made snow freezes quickly from a single droplet of water. The resulting snow consists of billions of tiny spherical balls of ice. It may resemble natural snow to the naked eye on a ski run, but the natural and artificial snow “feel” very different.