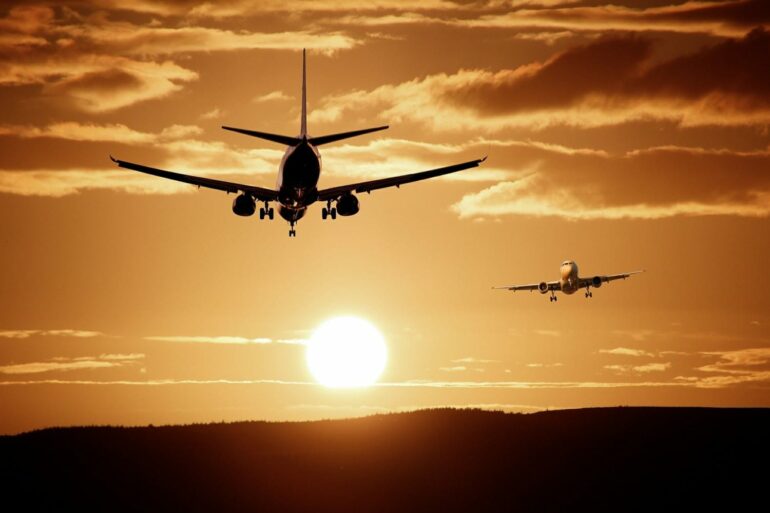 By Éric SCHULZ, consultant and former senior executive in the aerospace industry

And Jean-Michel SCHULZ, professor in aerospace technologies and specialist in cryogenics and aeronautical composites.

Decarbonization is one of the key challenges, especially for civil aviation. One of the promising possibilities is the use of hydrogen, in gaseous or liquid form, either directly as a jet fuel, or via a hydrogen fuel cell associated with electric motors. The advantage of hydrogen lies in its high energy content by mass, up to 4 times higher than that of kerosene, depending on whether one considers the lower or higher calorific value. But there are also disadvantages to the use of hydrogen, which are first its high flammability in contact with oxygen and its explosive range. Another disadvantage is its low density, especially when it is gaseous (about 42 kg/m3 at 700 bar), but also in liquid form (71 kg/m3), which is almost 12 times less than kerosene.  This means that, for an identical amount of energy, liquid hydrogen requires a storage volume at least 3 times greater than that of kerosene. Finally, the use of liquid hydrogen requires it to be maintained at a temperature of -252°C, which necessitates the use of cryogenic technologies and generates specific problems linked to very low temperatures, heat transfers and the tank insulation vacuum technics. Cryogenic storage solutions exist, but for the time being, they only concern ground installations, therefore without volume and weight constraints, or in space applications with low constraints of operation longevity. The main danger of cryogenics is generated by the quantity of fluid in a liquid state, which when heated becomes gaseous and tends to occupy a much larger volume generating a strong pressure rise which can lead to the explosion of the installation.

The problem of the hydrogen aircraft therefore lies in the development of secure, light cryogenic storage and transfer systems that can exploit unused volumes and with thermal insulation capable of limiting and eliminating the heat input that causes the liquid to evaporate. For the past two years, the startup SHZ Advanced Technologies has been innovating in these fields and has filed numerous patents, which enable it to propose a concept of integrated liquid hydrogen storage and distribution system particularly well adapted for regional and medium-haul aircraft, but also, and this is a major innovation, for long-haul aircraft.

The design of liquid hydrogen tanks results as a compromise between thermal performance, weight, reliability (especially mechanical) and costs (purchase, assembly and maintenance) of the installation. The technologies currently presented are based on a “super-insulated” internal tank containing the cryogenic fluid and it contained in an external envelope with a high vacuum separation. The dimensioning of such an envelope is penalizing because it is exposed important mechanical constraints. To resist these constraints, the tanks are cylindrical and very thick, which penalizes the mass of the tank and given the volumes, imposes its integration at the rear of the aircraft cabin to the detriment of passenger numbers. SHZ Advanced Technologies has devised a patented technical solution, which is much more favorable mechanically (especially for composite materials), and which makes it possible to neutralize the compression and shearing stresses of the outer shell while maintaining it under vacuum to preserve thermal insulation. Designed this way, the tanks will be lighter and no longer need to be cylindrical, which makes it much easier to integrate them into tight spaces such as wings or cargo compartments. In doing so, this solution allows for several very significant improvements compared to the solutions presented by other projects. Still about tanks, SHZ Advanced Technologies has also patented a double internal envelope system in which the inner tank containing the liquid hydrogen is enclosed in a tank containing a pressurized inert gas: helium. Thus, in the event of a leak in the hydrogen tank, it is the inert gas that will migrate towards the hydrogen and not the other way around. This solution adds an essential level of protection against any critical failure. The only chemical element that can remain gaseous at liquid hydrogen temperatures is helium. Like the pressurization spheres on some space launch vehicles, the SHZ Advanced Technologies system consists of a small tank of liquid helium at 4 K, which provides the helium needed to fill the gap between the double envelopes. By vaporizing and heating to the temperature of liquid hydrogen (20 K), the helium provides cooling power capable of inhibiting external heat transfer, thus ensuring that the liquid hydrogen remains at temperature. When the hydrogen is consumed by the engines, the gaseous helium in the double envelope replaces it in the inner tank by maintaining a slight overpressure. Thus, the hydrogen is pneumatically transferred into the fuel circuit and the use of cryogenic hydrogen pumps is then only limited to engine injections. This configuration provides an unparalleled level of safety. During fuel filling operations, the helium gas in the fuel tanks is recovered for cooling. Moreover, the presence of liquid helium on board the aircraft will be an important asset for future superconducting electric motors (cooling).

To maintain the hydrogen in a liquid state, some projects envisage to embark refrigerators. However, refrigeration cycles at very low temperatures are very penalizing in terms of energy and mass. Evaporation is a natural thermal regulator which allows to maintain the temperature of a fluid stable when a part of it remains in liquid form. Because of the high usage and rotation rate of aircraft, SHZ Advanced technologies provides a hydrogen vapor withdrawal circuit, either to the propulsion units if the aircraft is in operation, or via a secure exhaust if no engine or fuel cell is likely to receive this fraction of fuel. The setting of the exhaust valves prevents any pressure build-up in the tank.  In the case of a more substantial evacuation linked to an incidental situation, SHZ Advanced Technologies has also designed a patented rapid jettison system, operational both in flight and on the ground, by taking advantage of the high volatility of hydrogen in the air. Finally, the onboard cryogenic tanks are subject to external accelerations and vibrations linked to the kinematics of the aircraft and internal vibrations linked to transient phenomena in the fluid transfer lines. To this end, SHZ Advanced Technologies has invented a support and damping solution for the internal fuel tank capable of limiting these disturbances and accelerations, as well as measuring the masses and hydrogen consumption in real time.

The fuel distribution system of a liquid hydrogen aircraft also generates a certain complexity. The design consists in finding an optimum which allows to minimize the thermal losses, to ensure the thermal expansion cycles of the cryogenic fluid piping during the temperature changes and, by redundant systems, to ensure the integrity of the line in case of insulation failure. Conventional rigid technologies are often bulky, heavy, and costly, therefore not well suited for commercial aviation. SHZ Advanced Technologies has developed an insulated, flexible, high-thermal-performance pipeline system for on-board hydrogen transport. By eliminating all or part of the complex phases of “super-insulation” with a self-supporting insulating structure under vacuum, industrialization becomes particularly adapted to medium and large series, necessary in the framework of aircraft manufacturing.

Cryogenic device control requires very specific monitoring. For example, accidental situations that lead to unexpected heat input can result in extremely fast pressure increases. A cryogenic fluid leak also creates several dangers, which can become catastrophic. SHZ Advanced Technologies has patented a full authority device called FADHyCC (Full Authority Digital Hydrogen Cryogenic Control) which ensures the control of the on-board storage system using independent channels, both in flight and on the ground, including during critical filling and maintenance phases. Figure 2 shows the FADHyCC block diagram and its interactions with the other systems.

All the technical innovations presented allow to propose a new aircraft architecture. By getting rid of the constraint of having a strictly cylindrical tank, it is now possible to use a large part of the volume available in the fuselage and the wings of the aircraft.

One step closer to lifelike avatars

A major innovation proposed by SHZ Advanced Technologies consists in using part of the “front cargo compartment” to store the hydrogen fuel. The direct consequence of this solution is to combine the available volume with the aircraft’s center of gravity. By imagining a “symmetrical” load in terms of mass, the aircraft’s center of gravity can be controlled and optimized throughout its flight phase. The general concept is based on a conical trunk tank at the rear and a semi-cylindrical tank at the front of the payload bay. These two tanks with double internal walls are pressurized with helium which pushes the liquid hydrogen to the propulsion system. They are connected by a main pipe to the central box tank which feeds the two strongly slender wing tanks which are themselves connected to the engines. A secondary circuit system allows transfers directly between the different tanks.  The degree of thermal insulation is adjusted according to the residence time of the liquid hydrogen in the aircraft, from the most insulated on the upstream tanks to the least insulated on the wing tanks. The system is entirely controlled by the FADHyCC.

The gain in structural weight as well as the partial displacement of the hydrogen tanks towards the wings and the cargo compartments (holds) make it possible to drastically reduce not only the negative impact on the payload (passengers), but also the problem of an overly aft center of gravity by a better weight distribution. The performance and stability of the aircraft obtained allow this modular solution to achieve unequalled operational efficiency.

The table in figure 3 allows to compare the performances of the different technical solutions. This is a study of the transformation into liquid hydrogen of a conventional kerosene aircraft without redesign and at the same operating point. For medium-haul aircraft, the so-called “traditional cryogenics” technology composed of 2 dewar tanks located at the rear of the aircraft (solution envisaged by the manufacturers), is compared with the same aircraft integrating the new SHZ Advanced Technologies. Due to the volume occupied by these dewar tanks in this configuration, the operational penalty is enormous due to the number of passengers lost from the aircraft. The SHZ Advanced Technologies solution limits the volume of cargo by occupying part of the forward compartment but allows to maintain more than 94% of the number of passengers compared to the same aircraft in kerosene version, i.e., 40% more than the traditional cryogenic versions considered today. SHZ Advanced Technologies’ solutions also make it possible to imagine a long-haul hydrogen-powered version for which the operational efficiency is even better.

Figure 4 represents a non-exhaustive list of the main risks related to the presence of liquid hydrogen in an aircraft. The right-hand column represents the re-evaluation of the same risks considering the contribution of SHZ Advanced Technologies’ technical solutions in terms of safety. Here again, these solutions allow a drastic reduction of the residual risks.

The hydrogen aircraft is a viable solution. Its introduction requires disruptive innovations to define new architectures that will optimize operational performance.  Hydrogen storage and distribution solutions are essential to achieve the level of efficiency required for economic profitability, while preserving a very high level of safety. This is the challenge taken up by SHZ Advanced Technologies through its innovative solutions, which bring massive efficiency improvements compared to other solutions considered.  Of course, the technical solutions and the advantages they deliver, are not limited to air transport and are likely to interest many other transport industries such as the automotive, trucks, naval and railway industries.