Why the brain is programmed to see faces in everyday objects 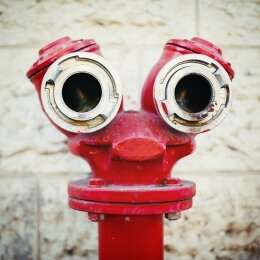 If you tend to notice faces in inanimate objects around you like the scowling face of a house, a surprised bowling ball, or a grimacing apple, you’re not alone.

‘Face pareidolia’ – the phenomenon of seeing faces in everyday objects—is a very human condition that relates to how our brains are wired. And now research from UNSW Sydney has shown we process these “fake” faces using the same visual mechanisms of the brain that we do for real ones.

In a paper published in the journal Psychological Science, lead researcher Dr. Colin Palmer, from UNSW Science’s School of Psychology, says seeing faces in everyday objects is very common, which is highlighted by the many memes and web pages devoted to it on the internet.

“Pages on websites like Flickr and Reddit have accumulated thousands of photographs of everyday objects that resemble faces, contributed by users from across the world,” he says.

AI learns to type on a phone like humans

“A striking feature of these objects is that they not only look like faces but can even convey a sense of personality or social meaning. For example, the windows of a house might feel like two eyes watching you, and a capsicum might have a happy look on its face.”

But why does face pareidolia occur? Dr. Palmer says to answer this question we need to look at what face perception involves. While human faces all look a bit different, they share common features, like the spatial arrangement of the eyes and the mouth.