Astronomers bounced a laser off a spacecraft whirling around the moon 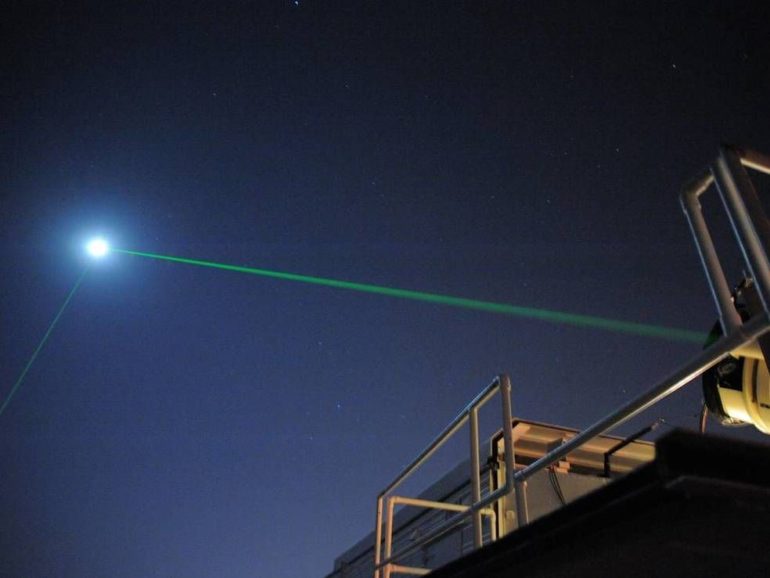 For the first time, scientists have successfully bounced a laser off a mirror that’s attached to a spacecraft whirling around the moon.

Bouncing lasers off mirrors on the lunar surface is an old trick. Astronauts walking on the moon first left reflectors behind in 1969. And since then, researchers have bounced lasers off those reflectors to make precise measurements of the distance between the moon and Earth, using the speed of light and the time it takes for the laser beam to return to Earth.

But hitting a laser in orbit around the moon is a much trickier task. The Lunar Reconnaissance Orbiter (LRO) has orbited the moon with a mirror on its back since 2009. But nearly a decade went by without a single successful laser bounce. In an Aug. 6 paper in the journal Earth, Planets and Space, a team of researchers report the first successful laser contact: Twice on Sept. 4, 2018 and twice again between Aug. 23 and Aug. 24, 2019, technicians at the Lunar Laser Ranging (LLR) station in Grasse, France, shot laser bursts at the LRO and saw the light return 2.5 seconds later.

To make sure that the light bouncing off the LRO returns in the direction from which it came, the mirror on its back is more complicated than the one in your bathroom. Like the older mirrors on the lunar surface, it’s a “corner cube” — a series of three-dimensional mirrors, each literally shaped like the inside of one corner of a cube. When a laser hits it, the light bounces three times before the geometry of the mirror returns it in the precise direction from which it came.