Cosmonaut Alexei Leonov, Who Was First to Walk in Space, Dies at 85 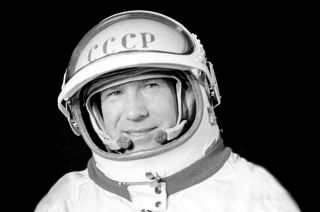 Soviet-era cosmonaut Alexei Leonov, who in 1965 became the first person to walk in space before co-leading the first joint mission between Russia and the United States, has died at the age of 85.

Leonov died on Friday (Oct. 11) at the Burdenko military hospital in Moscow after a long illness.

“One of the first cosmonauts of the world space era, forever devoted to his country and his work, he inscribed himself in golden letters in the world history of space,” said Roscosmos, Russia’s federal space corporation, in a statement. “With Alexei Arkhipovich a whole era has gone.”

Selected alongside Yuri Gagarin among the first 20 Soviet Air Force pilots to train as cosmonauts in 1960, Leonov flew twice into space, logging a total of 7 days and 32 minutes off the planet.