Could people breathe the air on Mars? 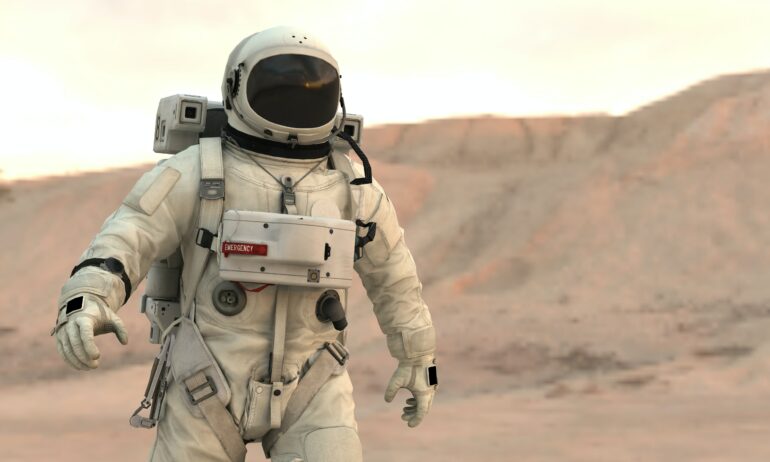 Let’s suppose you were an astronaut who just landed on the planet Mars. What would you need to survive?

Oxygen is in the air we breathe here on Earth. Plants and some kinds of bacteria provide it for us.

But oxygen is not the only gas in the Earth’s atmosphere. It’s not even the most abundant. In fact, only 21% of our air is made up of oxygen. Almost all the rest is nitrogen – about 78%.

Now you might be wondering: If there’s more nitrogen in the air, why do we breathe oxygen?

Here’s how it works: Technically, when you breathe in, you take in everything that’s in the atmosphere. But your body uses only the oxygen; you get rid of the rest when you exhale.

The air on Mars

The Martian atmosphere is thin – its volume is only 1% of the Earth’s atmosphere. To put it another way, there’s 99% less air on Mars than on Earth.

That’s partly because Mars is about half the size of Earth. Its gravity isn’t strong enough to keep atmospheric gases from escaping into space.

And the most abundant gas in that thin air is carbon dioxide. For people on Earth, that’s a poisonous gas at high concentrations. Fortunately, it makes up far less than 1% of our atmosphere. But on Mars, carbon dioxide is 96% of the air!

Meanwhile, Mars has almost no oxygen; it’s only one-tenth of one percent of the air, not nearly enough for humans to survive.

In AICompaniesRobotics
on 8 September 20204 min read

If you tried to breathe on the surface of Mars without a spacesuit supplying your oxygen – bad idea – you would die in an instant. You would suffocate, and because of the low atmospheric pressure, your blood would boil, both at about the same time.

So far, researchers have not found any evidence of life on Mars. But the search is just beginning; our robotic probes have barely scratched the surface.

Without question, Mars is an extreme environment. And it’s not just the air. Very little liquid water is on the Martian surface. Temperatures are incredibly cold – at night, it’s more than -100 degrees Fahrenheit (-73 degrees Celsius).

But plenty of organisms on Earth survive extreme environments. Life has been found in the Antarctic ice, at the bottom of the ocean and miles below the Earth’s surface. Many of those places have extremely hot or cold temperatures, almost no water and little to no oxygen.