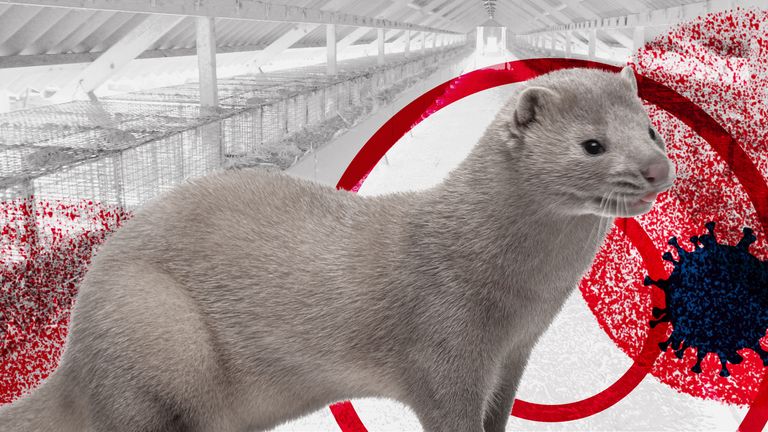 The mutations are identified as Covid-19 mink variants as they have repeatedly been found in mink and now in humans as well.

Uncertainty around the implications of the discovery of a Covid-19 mink variant in humans led Denmark, the world’s largest mink fur producer, to launch a nationwide cull earlier this month.

The cull was sparked by research from Denmark’s public health body, the Statens Serum Institut (SSI), which showed that a mink variant called C5 was harder for antibodies to neutralise and posed a potential threat to vaccine efficacy.

Denmark, the Netherlands, South Africa, Switzerland, the Faroe Islands, Russia and the US have all reported cases of mink-related mutations.

Despite a political backlash the cull has continued, and farmers have until midnight on Thursday to cull all mink in the country. However, the row over the cull has forced the resignation of the Danish agriculture minister, Mogens Jensen.

SSI director Kåre Mølbak has also said he would resign. It was the SSI’s findings on reduced antibody efficacy that led to the cull order. Mølbak told local media he is retiring because he is 65 and denied it was related to the mink cull.

Until now there had been no widespread reports of mink variants in humans outside Denmark. But scientists uploading virus sequencing and variant information to Gisaid, a global database initiative, said there have been signs of the mink variants around the world.

“We knew there were these mink variants in seven countries, but we only had about 20 genomes of each, which is very few. Then last week the Danes uploaded 6,000 genome sequences and with those we were able to identify 300 or more of the mink variant Y453F in viruses having infected humans in Denmark,” said University College London (UCL) Genetics Institute director Francois Balloux.

Asked about the implications of the findings, Balloux said it was an indication of the need to cull farmed mink. “A bigger host reservoir means more infections in humans. The main point here, I think, is that although the mutation might not be scary, there is still very good reason to get rid of the mink reservoir. We just don’t need it.” In Denmark, he added, they have a lot of mink, “over three times more than humans”.

The prevalence of Danish mink-related mutations is evident in the Gisaid database. “Denmark has 329 F-variant sequences, which roughly maps to as many individuals, although there may be some duplicates,” said Prof Seshadri Vasan from the University of York, who analysed the database for the mink variants. “The Netherlands has six. South Africa and Switzerland have two each, while the Faroe Islands, Russia and Utah [US] have one each.”

Asked how the spread might have happened, Vasan said that given some of the human and mink F-variants were from samples collected in Denmark in June, it might be that “movement of people, animals or goods could have spread the F-variant to other countries”.

But, because the Gisaid database includes only patchy patient information and no travel history – and as some of the samples lack collection dates – he said it is impossible to say exactly how and when the spread took place, although local scientists might be better placed to understand.

Last month, Vasan and his team published a global template aimed at improving the collection and sharing of de-identified patient information in a bid to improve data quality.

Viruses are known to mutate, but variants alone are not necessarily a problem. Most importantly, said Prof Joanne Santini, a microbiologist at UCL, we still don’t know whether this mutation happened in mink or humans first.

In a joint email this week to the Guardian, Santini and UCL colleague Prof Sarah Edwards, a bioethicist, said the Sars-CoV-2 Y453F variant in the spike protein is “unlikely to pose any serious risk to the expected efficacy of current candidate vaccines, or itself pose a new public health threat” on its own.

If, however, the variant originated in mink and spread to humans, “then we would have to doubt our ability to manage outbreaks in otherwise seemingly contained farm animals once detected”.

Constant mutations could be a source of concern too. The email added that “multiple additional variants in the spike protein could indeed have concerning implications for how infectious the virus is to humans and also to animals”, potentially posing “new threats to the expected efficacy of our candidate vaccines”.

“The early observations by CSIRO [Commonwealth Scientific and Industrial Research Organisation] scientists demonstrate the possible implications for the wider spread of Sars-CoV-2 variants between humans and animals,” she said.

Although Denmark is the only country to order a nationwide mink cull, others, including the Netherlands, Spain and, most recently, Greece, are killing mink with Covid-19. On Tuesday, Reuters reported mandatory mink testing had started in Poland, despite industry fears that tests could lead to a nationwide cull.

On the business side, the Danish cull has had immediate effects. Last week, Denmark’s breeder association and world’s largest fur auction house, Kopenhagen Fur, announced a “controlled shutdown” over the next three years, while Danish thinktank estimates put the cost of mink farm closures at about DKK3bn (£360m).

Sign up for the Animals farmed monthly update to get a roundup of the best farming and food stories across the world and keep up with our investigations. You can send us your stories and thoughts at [email protected]