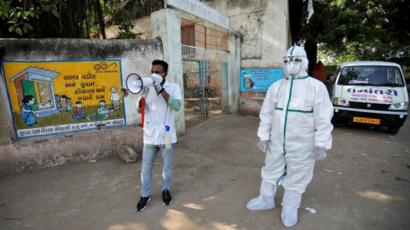 Tests for Covid-19 that show on-the-spot results in 15 to 30 minutes are about to be rolled out across the world, potentially saving many thousands of lives and slowing the pandemic in both poor and rich countries.

In a triumph for a global initiative to get vital drugs and vaccines to fight the virus, 120m rapid antigen tests from two companies will be supplied to low- and middle-income countries for $5 (£3.90) each or even less.

The tests, which look like a pregnancy test, with two blue lines displayed for positive, are read by a health worker. One test has received emergency approval from the World Health Organization (WHO) and the other is expected to get it shortly.

The quick and easy but high-quality tests will allow mass screening of health workers, who are dying in disproportionate numbers in low income countries.

Wealthy countries that have signed up to the Access to Covid tools initiative (ACT accelerator), as the UK has, will also be able to order the tests. The initiative was launched in March by the WHO, the European commission, the Gates Foundation and the French government.

In return for a volume guarantee from the Gates Foundation, the companies are making 20% of their production available to low- and middle-income countries and 80% to the rest. Germany has already ordered 20m tests and France and Switzerland are following suit.

The UK government is keen to get rapid virus tests, which were central to the “moonshot” proposals leaked recently, but it is not clear if they intend to buy these tests. It has invested in British-made saliva tests as well as rapid antigen tests, both of which take about 90 minutes. Saliva tests are being trialled in Salford and Southampton, while DnaNudge, which uses a swab read by a Nudgebox, is in use in some NHS hospitals.

But the WHO-approved rapid antigen tests are faster and easier, as well as cheaper, and could be used for screening in schools, universities and workplaces. Countries that can afford it could screen more generally. While the tests will not pick up all cases, they could allow many infectious people to be identified before they have symptoms and go into quarantine.

One of the tests, from the South Korean company SD BioSensor, has just been given emergency approval by the WHO, while the other, from the US company Abbott, is expected to get it shortly for a test it manufactures in South Korea.

Catharina Boehme, CEO of the non-profit Foundation for Innovative New Diagnostics (Find), a key player in the initiative, said they had put in bulk orders for the tests quickly so that low- and middle-income countries would not lose out in the global scramble for rapid tests, as they did when the PCR tests came out. “We see the pressure of supply building rapidly. That’s why we need this volume guarantee. We needed to secure volumes for low- and middle-income countries, before all the other countries place their orders and the poor populations again lose out.

“For us the message is about unprecedented collaboration. We are really able to show what can be achieved when the world and leading global health partners come together with a shared priority.”

Also in the partnership that has secured the deal are the Africa Centres for Disease Control and Prevention, the Clinton Health Access Initiative, the Global Fund and Unitaid.

Peter Sands, executive director of the Global Fund, said: “This is the ACT-Accelerator in action. It is proof that by working together at a massive global scale, we can develop and deploy a vital new tool to help contain and fight the pandemic. This is not just a new test – it’s the money and the deployment plan to get it to where it’s needed, fast. This is the power of global collaboration.”

The companies claim their tests are about 97% accurate, but that is in optimal conditions. Find puts their sensitivity between 80% and 90% in real-world conditions. That would pick up most infections. There is relatively little testing in most low- and middle-income countries at present. While North America tests 395 people per 100,000 population daily and Europe tests 243, Africa tests fewer than 16 – and most of those are in Morocco, Kenya and Senegal.

There are rapid antigen tests available for sale online, but these are the first to meet the WHO’s specifications and some tests have fallen short. Spain had to send back two batches of rapid tests it bought from unlicensed companies in China in March, because they were said to be faulty.

The ACT accelerator initiative is also working on bulk-buying and distributing drugs to treat Covid-19 around the world – and will share its global portfolio of vaccines when one of them is proved to work.