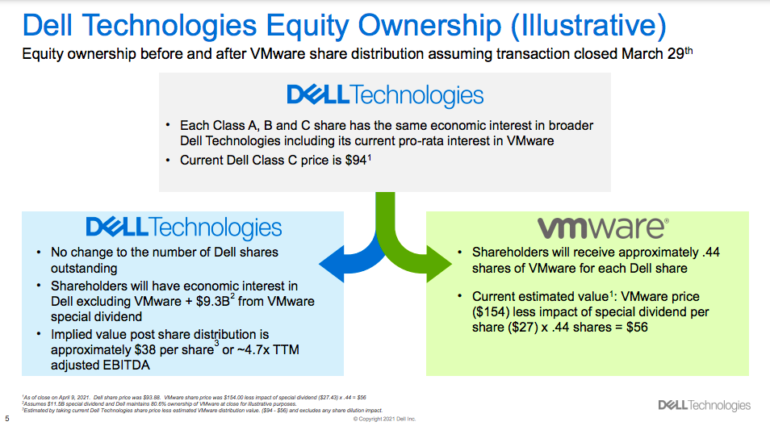 Dell Technologies will spin off its 81% majority stake in virtualization giant VMware, the company announced Wednesday. The move will create two standalone public companies, with Michael Dell remaining chairman and CEO of Dell Technologies, as well as chairman of the VMware board.

Zane Rowe will remain interim CEO of VMware as the search for a permanent chief executive continues.

In its investor presentation, Dell Technologies outlined what it sees as the benefits and rationale behind the transaction. In a nutshell, Dell views the spin-off as a way to give each company more strategic flexibility and improve capital structure efficiencies, while also maintaining VMware’s credit rating and improving its own. Dell plans to use the VMware proceeds — estimated to come in between $9.3 billion and $9.7 billion — to pay down its debt.

Dell also said it plans to maintain the mutually beneficial strategic relationship currently in place post spin, including the co-development of products and alignment on sales and marketing.

“By spinning off VMware, we expect to drive additional growth opportunities for Dell Technologies as well as VMware, and unlock significant value for stakeholders,” Michael Dell said in a prepared statement. “Both companies will remain important partners, providing Dell Technologies with a differentiated advantage in how we bring solutions to customers. At the same time, Dell Technologies will continue to modernize its core infrastructure and PC businesses and embrace new opportunities through an open ecosystem to grow in hybrid and private cloud, edge and telecom.”

VMware, founded in 1998, was bought by EMC in 2004, and EMC was bought by Dell in 2016. Dell has been exploring a potential spin-off of VMware since last year, and said previously that it would wait until September 2021 before formalizing a corporate separation.

The U.S. is deciding how to respond to China’s digital yuan

The spin-off appears to still be following that trajectory. Dell said in its press release that the transaction is expected to close during the fourth quarter of calendar 2021. Upon closing, VMware will distribute a special cash dividend of $11.5 billion to $12 billion to all VMware shareholders, including Dell Technologies. Dell Technologies is basing its estimated proceeds on its current 80.6% ownership in VMware.

For some historical context, Dell Technologies’ founder and CEO took the company private nearly eight years ago after more than two decades on the stock market in a deal worth $24 billion. Dell’s next turn of corporate machination came in 2018 when the company decided to return to the public market via a cash and share-swap deal that was meant to help the company boost revenue and raise funds.