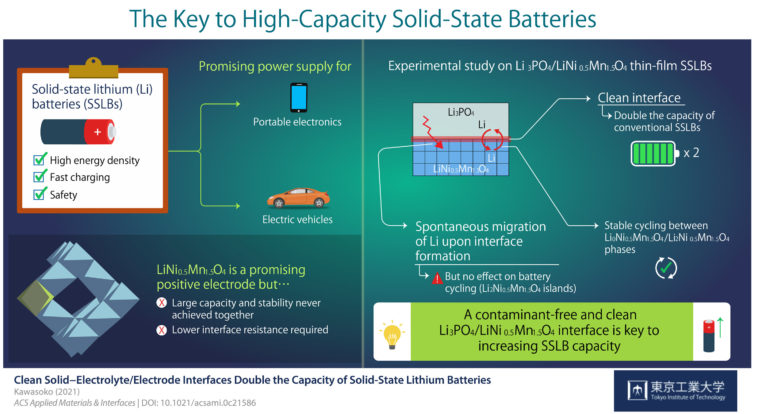 Scientists at Tokyo Institute of Technology (Tokyo Tech), Tohoku University, National Institute of Advanced Industrial Science and Technology, and Nippon Institute of Technology have demonstrated by experiment that a clean electrolyte/electrode interface is key to realizing high-capacity solid-state lithium batteries. Their findings could pave the way for improved battery designs with increased capacity, stability, and safety for both mobile devices and electric vehicles.

Liquid lithium-ion batteries are everywhere, being found in the majority of everyday mobile devices. While they possess a fair share of advantages, liquid-based batteries carry notable risks as well. This has become clear to the public in recent years after reports of smartphones bursting into flames due to design errors that caused the battery’s liquid electrolyte to leak and catch fire.

However, there are still many technical challenges preventing SSLBs’ commercialization. For the current study, researchers conducted a series of experiments and gained insight that could take SSLBs’ performance to the next level. Professor Taro Hitosugi from Tokyo Tech, who led the study, explains their motivation: “LiNi0.5Mn1.5O4 (LNMO) is a promising material for the positive electrode of SSLBs because it can generate comparatively higher voltages. In this study, we showed battery operations at 2.9 and 4.7 V, and simultaneously achieved large capacity, stable cycling, and low resistance at the electrolyte/electrode interface.”

Previous studies had hinted that producing a clean electrolyte/electrode interface was essential to achieve low interface resistance and fast charging in LNMO-based SSLBs. Scientists also noted that Li ions spontaneously migrated from Li3PO4 (LPO) electrolyte to the LNMO layer upon fabrication, forming a LiNi0.5Mn1.5O4 (L2NMO) phase in LNMO with unknown distribution and impact on battery performance.

The team investigated what the L2NMO phase was like, analyzing the changes in crystalline structure between the Li0Ni0.5Mn1.5O4 (L0NMO) and L2NMO phases during charging and discharging. They also studied the initial distribution of L2NMO at clean LPO/LNMO interfaces fabricated in a vacuum, as well as the effect of electrode thickness.

Strikingly, the clean interface facilitated the intercalation and deintercalation of Li during charging and discharging of the SSLBs. As a result, the capacity of SSLBs with a clean interface was twice that of conventional LNMO-based batteries. Moreover, this study marked the first time stable reversible reactions were found between the L0NMO and L2NMO phases in SSLBs.

Assistant Professor Hideyuki Kawasoko of Tohoku University and lead author of the study remarked, “Our findings indicate that the formation of a contamination-free, clean LPO/LNMO interface is key to increasing the capacity of SSLBs while ensuring low interface resistance for fast charging.”

Aside from mobile devices, SSLBs could find a home in electric cars, for which cost and battery durability act as major barriers for widespread commercialization. The results of this study provide important insight for future SSLB designs and pave the way for a transition away from fossil fuels and towards more ecofriendly ways of transportation. Keep an eye out for the advent of SSLBs!

Why does gravity pull us down and not up?