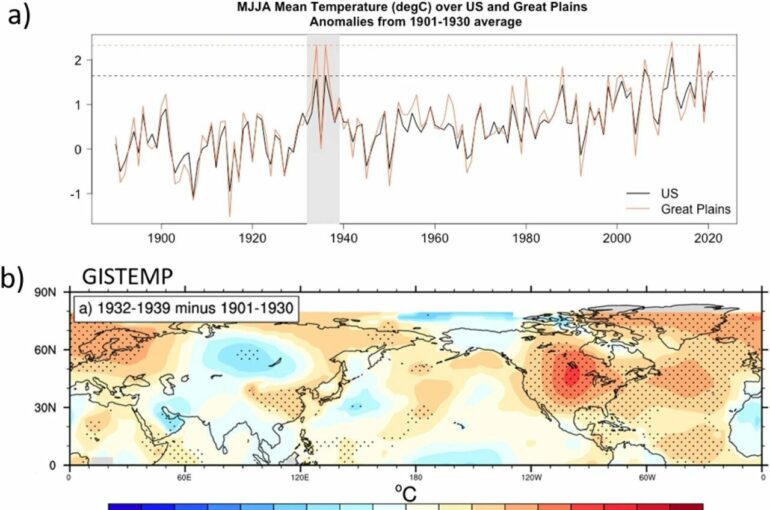 The 1930s Dust Bowl, fueled by overplowing across the Great Plains and associated with record heat and drought, appears to have affected heat extremes far beyond the United States.

New research finds that the hot, exposed land in the central U.S. during the Dust Bowl drought influenced temperatures across much of North America and as far away as Europe and East Asia. That’s because the extreme heating of the Great Plains triggered motions of air around the Northern Hemisphere in ways that suppressed cloud formation in some regions and, in combination with the influence of tropical oceanic conditions, led to record heat thousands of miles away.

“The hot and dry conditions over the Great Plains during the Dust Bowl spread extreme heat to other areas of the Northern Hemisphere,” said Gerald Meehl, a scientist with the National Center of Atmospheric Research (NCAR) and lead author of the new study. “If you look at daily record high temperatures, some of these areas are just now breaking the records that were set in the 1930s.”

To determine the climatic impact of the Dust Bowl, the research team drew on observed high and low daily temperatures, as well as advanced computer models of the global climate system. They focused on the role of a teleconnection pattern, known as wave-5, that can regulate the meandering of jet streams and link far-flung weather patterns around the Northern Hemisphere during summer.

The study was published in Scientific Reports.

Teasing out the Dust Bowl’s influence

The Dust Bowl is widely viewed as one of the nation’s worst environmental disasters. Farmers in the early part of the 20th century plowed up millions of acres of native grassland across much of the Great Plains to plant wheat and other crops. When a multiyear drought struck in the 1930s, the exposed land became exceptionally hot and topsoil blew away, causing devastating dust storms as well as a health and economic catastrophe.

The new research points out that extreme weather conditions extended far beyond the immediate vicinity of the Dust Bowl. Much of North America, northern Europe, and eastern and northeastern Asia experienced such heat that some record high temperatures of the 1930s are only now being exceeded as temperatures rise with climate change.

Previous research pointed to patterns of warm and cool surface temperatures in the tropical oceans as triggering the drought in the Great Plains. These conditions were associated with a pair of multidecadal phenomena known as the Interdecadal Pacific Oscillation (IPO) and Atlantic Multidecadal Oscillation (AMO). The question addressed by Meehl and his co-authors was whether such oceanic conditions could also explain the hot and dry weather around so much of the Northern Hemisphere, or if the Dust Bowl itself played a role.

To tease out the influence of the Dust Bowl, the scientists first used an NCAR-based model of global climate, known as the Community Earth System Model (CESM). They ran a series of simulations on the Cheyenne supercomputer at the NCAR-Wyoming Supercomputing Center to see whether the IPO and AMO could fully account for the distribution of extreme daily high temperatures across three continents. But even though they set the model to capture the likely oceanic conditions of the time, they could not reproduce the high daily temperatures of the 1930s.

They then turned to a version of the CESM atmospheric model that is a component of the DOE Energy Exascale Earth System Model, and set the model to isolate the influence of the extreme heat over the Great Plains during the 1930s. This time the results closely matched actual climate records, indicating that the Dust Bowl generated an atmospheric reaction that, in combination with conditions in the tropical Pacific and Atlantic, triggered extreme heat across vast areas of the Northern Hemisphere.

“When you put the influence of the Great Plains Dust Bowl drought in the model, you get record-breaking heat in the areas where we saw them in the Northern Hemisphere during the 1930s,” Meehl said.

Additional analysis of the simulations revealed the reason the Dust Bowl had such a pronounced effect on other regions: it generated a series of far-reaching vertical motions in the atmosphere. Such movements are known as a wavenumber-5 or wave-5 teleconnection—so named because it consists of five pairs of alternating high- and low-pressure features that encircle the globe along jet streams.

In this case, the intense surface heating of the Great Plains created an upward motion of warm air, which then moved downward in surrounding areas, suppressing the formation of clouds over much of the northern U.S. and Canada. It also produced sinking air that suppressed clouds in other regions around the Northern Hemisphere, allowing more sunlight to reach the surface and resulting in soaring temperatures. At the same time, the pattern enabled warm, southerly winds to reach as far north as Scandinavia and eastern Asia. These winds contributed to the extreme heat over much of northern Europe and parts of eastern Asia.

Meehl said the study helps illuminate how conditions on one part of the planet can affect the atmosphere thousands of miles away. Scientists have long known about the climatic influence of the vast tropical oceans, which pump out enormous amounts of relatively moist, warm air affecting weather patterns worldwide, as with El Niño. But it has proven more difficult to tease out linkages that arise from conditions over smaller areas of land in the midlatitudes, especially during summer.

“This is a mechanism that arose in a unique way from human influence—not by burning fossil fuels but from plowing up the middle third of the U.S.,” Meehl said. “It’s possible that intense regional droughts in the future could also influence heat extremes in the Northern Hemisphere.”