A surprisingly soft mineral may control how Earth recycles rocks 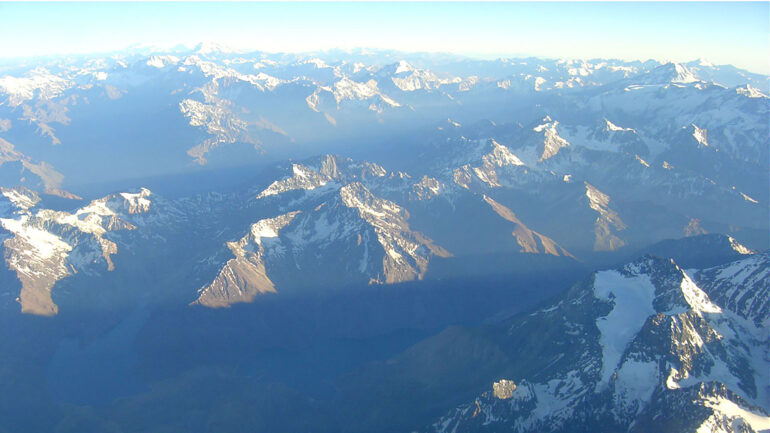 The geological events we see on the surface of the Earth as mountains, volcanoes and earthquakes are expressions of processes that are happening deep in our planet. Here on the Earth’s crust, we’re part of a conveyor belt system called plate tectonics where old crust at the margins of oceans are shoved back underground beneath continents, into the mantle.

As that crust goes deeper into the Earth, some of the minerals in the rocks change under the high temperatures and pressures of the mantle. New research from University of Utah geologist Lowell Miyagi and colleagues finds that one of these mantle minerals is among the weakest in the Earth’s interior.

It’s a tough mineral to study, but the research shows that it’s around 1,000 times softer than much of the rest of the mantle. This is important for understanding what happens to slabs of rock as they sink into the Earth, which in turn teaches us about how and why earthquakes and volcanoes happen on the surface.

“We want to understand the mechanical properties of all these rocks and minerals because this is what determines how a slab will behave when it sinks into the Earth’s interior,” says Miyagi, associate professor of geology and geophysics.

The study is published in Nature.

Plate tectonics above and below ground

The crust of the Earth is made of plates—large sections of crust that to our perception seem immovable and eternal. The plates that make up the oceans start as magma rising in the center of the plate at a place called, descriptively, the “mid-ocean ridge.” That magma turns to basalt, similar to the black volcanic rock we see spouting from Hawaiian volcanoes.

As magma continues to rise, the plate spreads, pushing older basalt crust to the sides. Every plate runs into its neighbors and when it does ocean crust, which is denser than the crust on the continents, is pushed down into the mantle. It’s a process called subduction.

After that, our best clues as to the fate of this recycled crust come from our readings of seismic waves, generated by earthquakes, that travel through the interior of the Earth.

“It’s a bit like when you go to the doctor to image a baby with ultrasound,” Miyagi says. “In this case the waves are bigger and the baby (the Earth) is bigger.”

Seismic waves travel through different materials at different speeds, so when seismic waves show something unusual, geoscientists pay attention and naturally wonder- what’s that made of? One of these notable unknowns is a feature at the boundary between the mantle and the core known as a Large Low Shear Velocity Province, or an LLSVP. There are two: one beneath the Pacific Ocean and one beneath Africa. And they’re huge—the province beneath the Pacific is about 1,800 mi (3,000 km) wide—about the distance from Salt Lake City to Washington, D.C. And they’re tall, possibly up to 600 mi (1,000 km) high. That’s more than 100 times the height of Mount Everest.

(The edges of these provinces feature ultra-low velocity zones, or ULVZs, that featured in a previous U study here.)

Geoscientists previously thought that these provinces were hotter than the surrounding rock, and might be the source of some volcanic features like the Hawaiian Islands or the East African Rift Zone. “However more recently people think that these are a different kind of rock than the mantle,” Miyagi says. “So the question is: What kind of rock is it, and how does it pile up there?”

One candidate is the mineral davemaoite, with the chemical formula CaSiO3. It’s part of a class of minerals called perovskites. Sinking slabs of rock are rich in davemaoite (up to 30%), and the rest of the mantle doesn’t have much of it. So although it’s important to know the mechanical properties of davemaoite, like how it bends or stretches in the mantle, to know how the Earth recycles material from the surface into the deep interior, it’s been a tough mineral to study. Why?

“It is very difficult to study because it cannot survive to room pressure,” Miyagi says. “It has to be made at high temperature and pressure. If you take the pressure and temperature away it becomes a glass.” The only davemaoite found at the surface thus far, reported recently in 2021, was trapped inside a diamond, which maintained the high pressure needed to keep its atomic structure together.

So how did the research team, which included scientists from Utah, California, Germany and the UK, manage to study the mechanical properties of davemaoite? By squeezing powdered CaSiO3 under 30 gigapascals of pressure (19 times the pressure of the deepest point of the ocean) between two diamond anvils and heating it to 1600 °F (1150 K). They had to build a window into the apparatus just to let an X-ray beam through to analyze the atomic structure of the resulting crystal.

After analyzing the structure of davemaoite, the researchers modeled its strength and behavior when being stretched or pulled. Davemaoite, they found, is about 1,000 times softer than the rest of the mantle.

What does that mean, though? The viscosity of a material, or its ability to flow, is measured in several different units, including Pascal seconds. Something very thin, like water, is about 0.001 Pascal seconds, while something thicker like peanut butter is around 200 Pascal seconds. The Earth’s lower mantle comes in at around 1021 Pascal seconds—a LOT thicker than peanut butter. But if the mantle is peanut butter, then davemaoite is maple syrup. And anyone who puts both of those on their pancakes knows that the difference between the two is significant.

So, let’s walk through how this difference affects a slab of rock sinking into the Earth. At a depth of around 340 mi (550 km), the temperature and pressure forms davemaoite in much of the slab, suddenly making it very weak.

“Those weak parts of the slab could then delaminate or peel away from the rest of the slab and then fall away into the mantle,” Miyagi says. “We have seismic images that look like parts of slabs have separated and fallen away.”

If this dense material, rich in davemaoite, separates and sinks, it’s plausible that it could form a Large Low Shear Velocity Province, Miyagi says. “This would occur over long time periods of piling up this material by dripping these upside-down plumes to the base of the mantle.”

There’s a lot still to explore about how the properties of the minerals inside the Earth affect how things move around. “Knowing the mechanical properties of this material gives us a better understanding of how slabs subduct and behave in the Earth’s interior,” Miyagi says. “So, this can give us a better understanding of the large-scale processes that drive plate tectonics and thus earthquakes and volcanoes.”