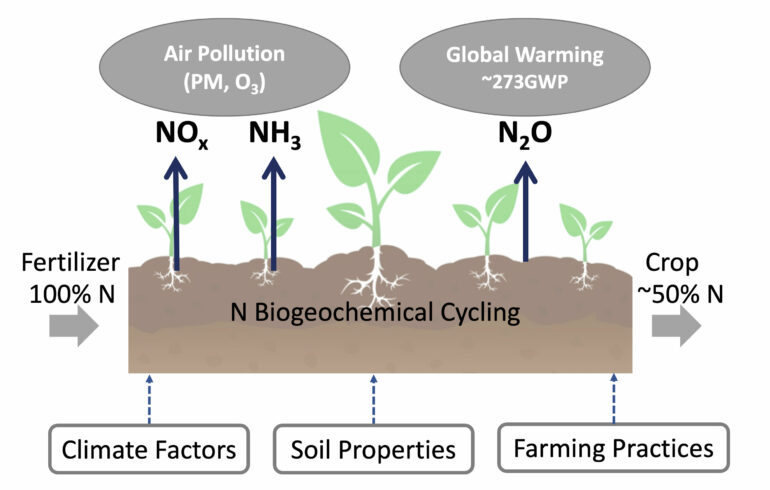 Agricultural pollution comes from the prairie, but its economic impact on humans is a problem for cities.

The study led by Daniel Cohan, an associate professor of civil and environmental engineering, and graduate student Lina Luo quantifies emissions of nitrogen oxides, ammonia and nitrous oxide from fertilized soils over three years (2011, 2012 and 2017) and compares their impacts by region on air quality, health and climate.

While seasonal and regional impacts differ across types of emission, the study found total annual damages from ammonia were much larger overall—at $72 billion—than those from nitrogen oxides ($12 billion) and nitrous oxide ($13 billion).

Air pollution damages are measured by increased mortality and morbidity and the value of statistical life, while monetized damages from climate change include the threats to crops, property, ecosystem services and human health.

On that basis, the researchers found the health impact of air pollution from ammonia and nitrogen oxides, which react to form particulate matter and ozone, substantially outweighed climate impact from nitrous oxide in all regions and years.

The highest social costs arose from agriculture-heavy regions of California, Florida and the Midwest, where ammonia and nitrogen oxides form air pollution upwind of population centers. For both pollutants, emissions peak in the spring after fertilizers are applied.

The study in the American Chemical Society journal Environmental Science & Technology concludes air pollution, health and climate should all be considered in future assessments of how farming practices affect reactive nitrogen emissions.

“We always talk about how carbon dioxide and methane contribute to greenhouse gases, but nitrous oxide is about 300 times more potent than carbon dioxide for its global warming potential,” Luo said.

She noted farming strategies that reduce greenhouse gases can increase air pollutants and vice versa. “We need to see if they can reduce all three nitrogen species—or make some tradeoffs—and still not decrease crop yield,” Luo said.

Nitrogen is essential for crop growth, Cohan added, but the study shows the importance of controlling agricultural emissions has been largely neglected by air quality management and climate policy, even as the Environmental Protection Agency considers tightening air quality standards and the Biden administration seeks to slash greenhouse gas emissions.

He said federal agencies have focused on controlling transportation and industrial emissions, leaving agriculture as the largest source of damaging nitrogen pollutants in the United States, a problem exacerbated by climate change and increased crop production.

“Our group had been studying nitrogen oxide emissions for a number of years and began to realize that we can’t just focus on that,” Cohan said. “We needed to consider the range of emissions that come from soils, and we became curious about the relative impacts of different air pollutants and greenhouse gases the emanate from agricultural soils.

“A big part of our motivation was realizing that choices in farming practices might cause some emissions to go up and other emissions to go down,” he said. For instance, switching from surface broadcast to deep injection of fertilizers would lower ammonia but raise nitrogen oxide emissions. That would benefit nearby cities sensitive to particulate matter levels, but harm regions where ozone is of more concern.

Cohan said when all the emissions are quantified on a monetary basis, ammonia and nitrogen oxides that form air-polluting particulate matter and ozone and contribute to global warming have the greatest impact.

“Those of us who study these pollutants for a living know how potent ammonia is, but the message hasn’t gotten through to most regulators and policymakers,” Cohan said. “In fact, ammonia is one of the most potent sources of particulate matter because of how it binds with other pollutants to have a multiplying effect.

“That’s an important message: We need to take more steps to control ammonia,” he said.

If there’s a silver lining, Cohan said, it’s that pollution from other sources has dropped enough to make agriculture’s impact prevalent.

“What’s crucial is to take steps that have more of the nitrogen go to the crops, and less of it be released to the air and water,” he said. That could involve adding biochar or other amendments to soil, a topic of ongoing study at Rice.

“Before we can do that, we needed to establish a baseline of emissions coming from the soil,” Cohan said. “This paper lays that out.”