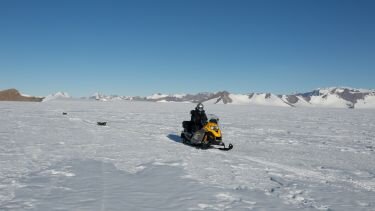 The world’s first inventory of subglacial lakes has been compiled by an international team led by the University of Sheffield, providing researchers with a comprehensive directory of where the lakes are and how they are changing in a warming climate.

Subglacial lakes can form underneath ice sheets or glacial valley regions. They can play a critical role in the speed at which ice flows into oceans and, when on land in mountainous regions, could pose a major risk to populations downstream if they were to drain and cause flooding and landslides.

It is believed that there are many thousands of subglacial lakes worldwide but, until now, their details were not collectively held and there was no clear picture on the size, stability and characteristics of the lakes.

An international team of researchers led by Dr. Stephen Livingstone, from the University of Sheffield’s Department of Geography, has now cataloged data on almost 800 lakes in Antarctica, Greenland and Iceland, as well as in glacial valley regions such as the Alps.

The inventory, which has just been published in Nature Reviews Earth & Environment, details the lake environments and dynamics, their size, how they behave and the impact on their local area.

The inventory provides a knowledge base of the current status and location of the lakes, allowing scientists to assess any future changes as the climate warms. It also highlights the gaps in collective knowledge that will help researchers to focus on new areas in future.

While 80 percent of the lakes were found to be stable—meaning they have no addition or removal of water at all, or they have a balanced inflow and outflow—the researchers also observed that 20 percent of lakes are active. This means they can drain suddenly and catastrophically, posing a hazard to human populations and infrastructure downstream.

Geophysical data currently available mean that the majority of lakes included in the inventory are in Antarctica. The researchers have called for future studies to focus on valley glaciers, ice caps and the Greenland Ice Sheet to gain a better understanding of water storage and drainage beneath glaciers in vulnerable areas.

“Our inventory will enable researchers to evaluate subglacial lake environments and their dynamics across different regions. As the ice above subglacial lakes responds to climate change, lakes which were once stable may become unstable, and vice versa.

“Now we have a better understanding of how many lakes are currently stable, we can monitor how this changes with time. These changes are not just important for water and ice flow, but also for the lifeforms that exist in the lakes.”

Dr. Kate Winter, Senior Lecturer in Northumbria University’s Department of Geography and Environmental Sciences, said: “Subglacial lakes are fascinating. They can occur due to meltwater from the surface of the glacier traveling to the base and lying in in hollow areas or cavities, or they can occur due to geothermal heating from the earth below, warming the ice above and causing it to melt.

“The lakes are protected by a layer of thick overlying ice which insulates it from the cold air above, preventing them from re-freezing and can exist alone for millions of years, harboring unique life forms, or they can fill and drain over hourly timescales.

“These lakes can lubricate the base of the glacier or ice sheet and make ice flow faster, contributing to global sea level rise. In populated regions such as the Alps, the sudden release of subglacial lake water can cause catastrophic damage to life and infrastructure.

Possible chemical leftovers from early Earth sit near the core

“It is therefore important to study where subglacial lakes are, how much water they contain, how stable or active they may be and how they might be changing over time so we can learn more about why they form and what influence they may have on the local area.”

The 773 lakes cataloged in the inventory include 59 which have been newly identified in Antarctica—some of which measure up to six miles in length and are under 3,000 meters of ice.

The paper, “Subglacial lakes and their changing role in a warming climate,” is now available in Nature Reviews Earth & Environment.