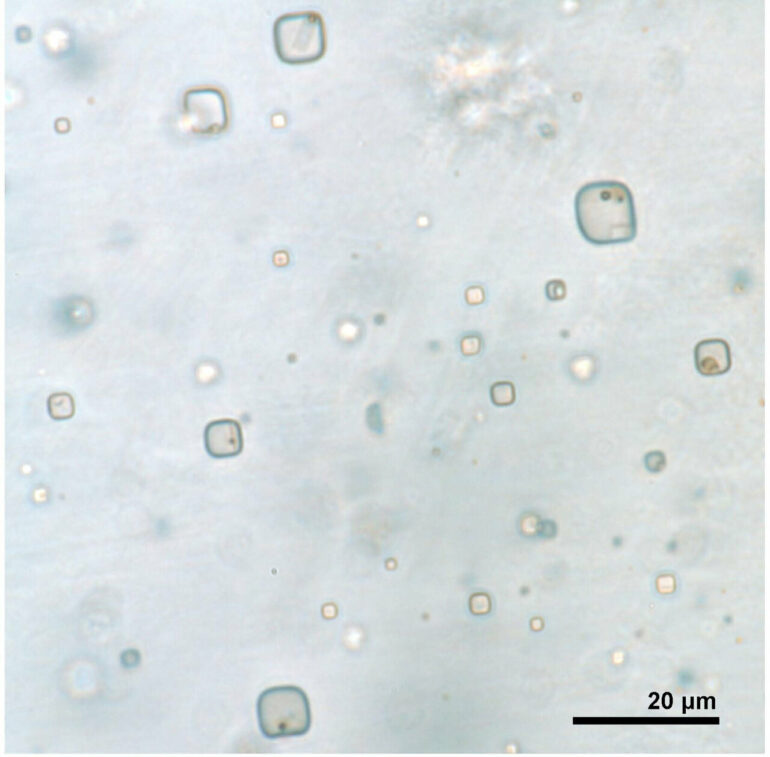 Primary fluid inclusions in bedded halite from the 830-million-year-old Browne Formation of central Australia contain organic solids and liquids, as documented with transmitted light and UV-vis petrography. These objects are consistent in size, shape, and fluorescent response to cells of prokaryotes and algae, and aggregates of organic compounds. This discovery shows that microorganisms from saline depositional environments can remain well preserved in halite over hundreds of millions of years and can be detected in situ with optical methods alone. This study, published in Geology, has implications for the search for life in both terrestrial and extraterrestrial chemical sedimentary rocks.

As halite crystals grow in saline surface waters, it traps parent water in primary fluid inclusions. In addition to trapping parent waters, they can trap any solids that were in the water near/on the crystal face. These solids include tiny crystals of evaporite minerals or organics. Previous studies of modern to Permian halites have documented the presence of prokaryotic and eukaryotic organisms and organic compounds including beta carotene.

The study used non-destructive, optical techniques to identify and document organic material in primary fluid inclusions in 830-million-year-old halite. Sara Schreder-Gomes, Kathleen Benison, and Jeremiah Bernau had access to core samples from the Neoproterozoic Browne Formation thanks to the Geological Survey of Western Australia.

The halite was well preserved and allowed them to examine halite crystals from 10 halite beds from varying depths. They used transmitted light petrography and UV-visible light petrography to identify primary fluid inclusions and their contents. The team found that solids trapped in fluid inclusions were consistent with prokaryotic and eukaryotic cells, and with organic compounds, based on their size, shape, and fluorescent response to UV-visible light.

This study reinforces the utility of non-destructive optical methods as a first step in examining chemical sediments for biosignatures. The petrographic context of fluid inclusions is vital to ensuring the contents of fluid inclusions represent original parent waters and therefore are the same age as the halite. This study also shows that microorganisms can be preserved in fluid inclusions in halite for millions of years and suggests that similar biosignatures may be able to be detected in chemical sediments from Mars.


Citation:
Ancient microorganisms found in halite may have implications for search for life (2022, May 11)