Bacteria can travel thousands of kilometers on airborne dust 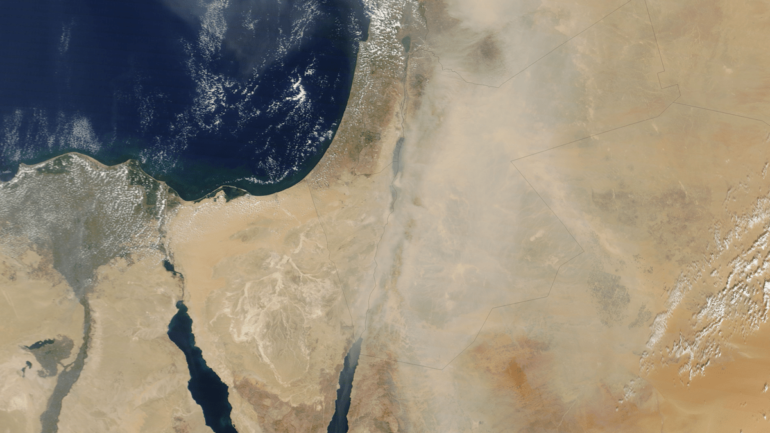 When winds lift dust off the ground, attached bacteria go along for the ride. These airborne bacteria make up aerobiomes, which, when the dust settles again, can alter environmental chemistry and affect human and animal health, although scientists do not know exactly how.

In a new study published in the Journal of Geophysical Research: Biogeosciences, Daniella Gat and colleagues collected airborne dust at different times in Rehovot, Israel. The researchers used DNA sequencing to identify the bacterial community composition in the dust, whereas trajectory modeling revealed the dust’s origins. The researchers found that dust from different locations, including North Africa, Saudi Arabia, and Syria, could bring diverse bacterial communities from hundreds to thousands of kilometers away.

Bacterial communities on the ground were less similar to aerobiomes in Israel. However, 34% of Israel’s aerobiome bacteria, on average, likely came from Israeli soils, showing that soil can exchange a significant number of bacteria with aerobiomes. Fewer aerobiome bacteria were contributed by plant surfaces (11%) and by water from the Mediterranean and Red Seas (0.9%).

Understanding how aerobiomes could affect environments and health requires that scientists know what genes they carry, so the researchers compared the bacterial genes observed in airborne dust in Israel with those of the communities from the other examined environments. They found that on average, the dust bacteria contained greater proportions of genes that biodegrade organic contaminants like benzoate and confer antibiotic resistance compared with the bacteria in seawater, plant surfaces, or soils.

According to the researchers, higher proportions of these genes suggest widespread anthropogenic fingerprints on aerobiome community composition and function.

Dust-driven dispersal of antibiotic resistance genes could affect human and livestock health, according to the researchers, but site-specific analyses are needed to test whether dust introduces new antibiotic resistance to a given location. In addition, the antibiotic-resistant bacteria in dust may not be viable. To test this, the researchers plan to look for bacterial RNA in dust samples, which would indicate living bacteria cells.