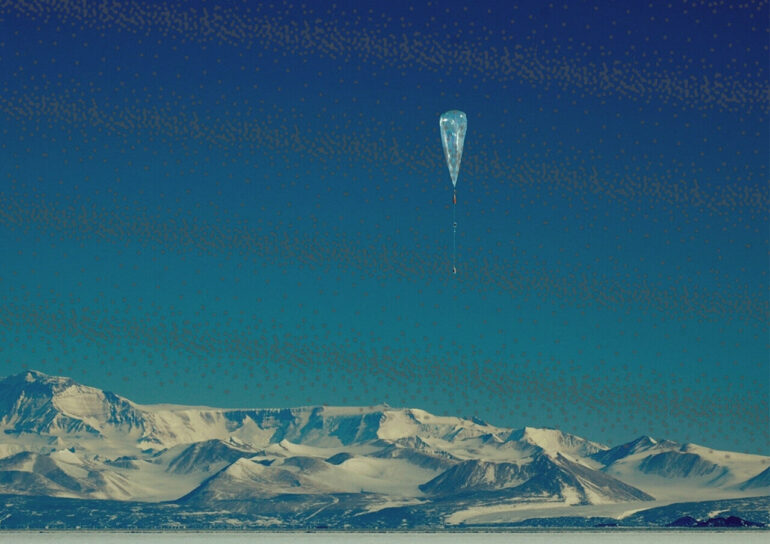 A new study in AGU’s Geophysical Research Letters reports on the first detection of a large, distant earthquake in a network of balloon-bound pressure sensors in the stratosphere. The technique could one day be applied on Venus, whose hot, dense and corrosive atmosphere limits our ability to sense Venus-quakes from the planet’s surface. The balloons could also be used on Earth in hard-to-reach places.

Monitoring seismic activity on other planets is critical for learning about their interior structures, but unlike on Earth, planetary scientists can’t rely on a global network of ground-based sensors. Instead, they turn to the atmosphere.

When an earthquake hits, the vibrating ground sends infrasound high into the atmosphere, where the balloons and their instruments are waiting. The balloons float through the stratosphere for several months after launch, passively following high-altitude atmospheric patterns. At about 11 meters in diameter and 30 kilograms (66 pounds), the balloons can support up to four instruments.

Seismology is relatively new in the stratosphere; the balloons are mostly used for atmospheric science. Previous research has confirmed that these balloon-based sensors can pick up small, local quakes, but until now, a multi-balloon network had not yet detected large earthquakes at a great distance.

On December 14, 2021, a magnitude 7.3 earthquake hit Indonesia’s Flores Sea. Within 10 minutes, four of IASE’s Strateole-2 balloons within a 3,000 kilometer (1860-mile) radius detected the resulting infrasound, at altitudes as high as 20 kilometers (12 miles). From those sensor data, Garcia’s research team was able to accurately back-calculate the earthquake’s magnitude and several other key parameters about both the quake and planetary structure. They were even able to track the dispersion of the seismic wave across the surface with their network.

“We are very, very happy because it was not only a single balloon that detected the earthquake, it was sensed on multiple balloons,” says Raphael Garcia, lead author on the new study and a planetary scientist at the Institut Supérieur de l’Aéronatique et de l’Espace of the University of Toulouse.

The study is an important proof-of-concept for applying this seismic monitoring technique on Venus. While the balloons have only been tested in Earth’s atmosphere, Garcia and his colleagues believe they will work in Venus’ carbon dioxide-rich atmosphere too.

In 2021, scientists studying Venus began referring to the next ten years as “the decade of Venus,” as three missions to the planet have been accepted for the early 2030s. Venus, Earth’s “sister planet,” intrigues planetary scientists with its unknown internal structure and poorly understood long term interactions between tectonics and atmosphere that ended up with such an inhabitable world compared to the nearby Earth. “The story for our interest in Venus is that we know nothing of its interior,” Garcia says. “We don’t know how it’s made inside, and on Earth, seismology is one of the best tools to figure that out.”

As part of the decade of Venus, several teams are working on balloon-based seismic monitoring, but the new study is the first to successfully capture large, natural quakes with multiple balloons, Garcia says.

“The search for detecting a big quake on stratospheric balloons, it’s a bit competitive,” he says. “But it’s a nice competition, because in the end, we’re working to demonstrate the same concept.” Still, he is pleased their team nabbed this accomplishment. The proposal for balloon-based seismic monitoring on Venus, called Phantom, will be submitted to the New Frontiers NASA missions in collaboration with JPL-NASA and North Carolina State University.

The network’s success also highlights the potential for balloon-based seismic monitoring to complement areas that are difficult to monitor with a ground-based network, such as the sea floor. The balloons could also be deployed as a rapid-response tool for monitoring aftershocks.