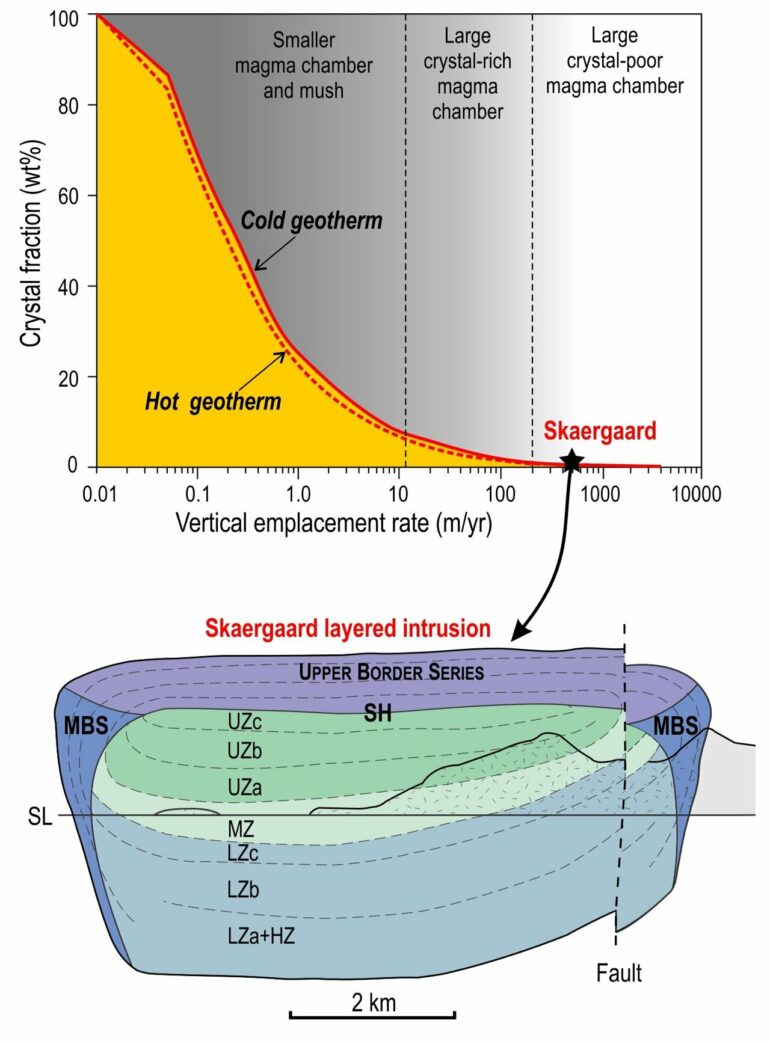 An international group of researchers involving geologists from Wits University (Prof. Rais Latypov and Dr. Sofya Chistyakova) in Johannesburg have come up with an unexpected conclusion that basaltic magma chambers can grow extremely rapidly—in months to years—making these chambers remarkable intrusive equivalents of caldera-forming eruptions associated with the Large Igneous Provinces. This research was published as a paper in Science Advances.

Professor Rais Latypov says that “the vertical rate at which magma chambers grow via magma emplacement is highly debated. Based on high-precision zircon dating and surface deformation measurements, most plutons are currently thought to be emplaced very slowly (a few cm/year). Such slow rates are, however, difficult to reconcile with the existence of large, well-differentiated intrusions which appear to form only if emplacement rates are very high. A key question we tried to address is which rate of magma emplacement is required to keep the growing chamber entirely molten?”

To answer this question, the researchers used a novel approach taking the classical Skaergaard intrusion in Greenland which started crystallizing from all margins inwards only after it had been completely filled with nearly crystal-free magma.

The researchers have used numerical simulations to determine the conditions required for forming such a large crystal-free magma chamber and found that the Skaergaard intrusion must have been emplaced in less than a few decades, if not months/weeks. The vertical growth rate must have been on the order of several 100s to a few 1000s m/yr, corresponding to volumetric flow rates of 10s to 100s of km3/yr. This makes the volumetric flow rate that fed Skaergaard several orders of magnitude higher than the currently accepted growth rates for basaltic magma chambers.

The researchers proposed that the Skaergaard and possibly other layered intrusions can be viewed as plutonic equivalents of super-eruptions (or catastrophic intrusions) that grow via extremely rapid magma emplacement into the crust, producing totally molten magma chambers in a matter of a few weeks/months to maximum dozens/hundreds of years.

“In other words, we suggest that some layered mafic intrusions may represent the plutonic analogs of the Large Igneous Provinces-related volcanoes that are responsible for eruptions of enormous volumes of flood basalts on the Earth’s surface,” says Latypov.

Levels of ‘forever chemicals’ reaching Antarctica have been increasing