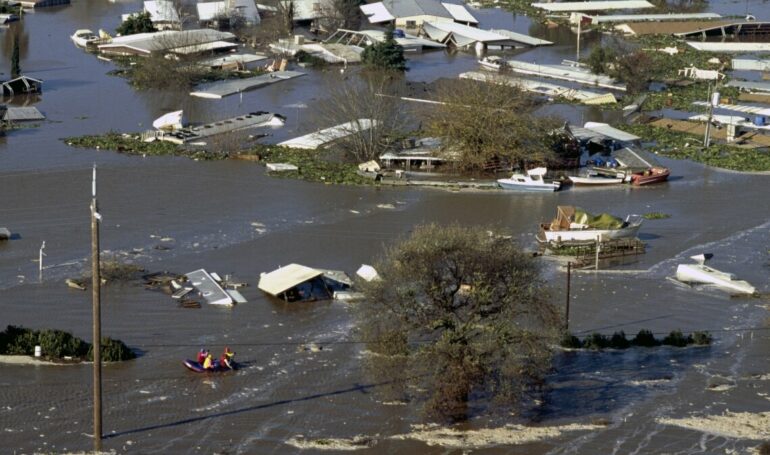 It may seem as if California is always either flooding or on fire. This climatic whiplash is not imagined: New University of Arizona research, published in the International Journal of Climatology, shows that while dry events are not getting drier, extreme wet events have been steadily increasing in magnitude since the middle of the last century. These increased extreme wet events can result in more dangerous flooding and also fuel wildfires.

“Most research after 2015 has been very focused on this climate variability and how it’s going to get worse in the future,” said lead study author Diana Zamora-Reyes, a graduate student in the Department of Hydrology and Atmospheric Sciences. “But, in this paper, the main takeaway is that this is happening right now, and that variability has been increasing for the past 50 years or so.”

“Going into this research, I thought that both wet events would get wetter and dry events would get drier, and that was what was causing the rise in variability,” Zamora-Reyes said. “I thought it would be both, but that wasn’t the case. My assumption was based on previous research that found there will be an increase in extreme precipitation events and they’re occurring in a smaller window of time.”

“California droughts are happening, our research just shows that they’re not caused by less precipitation,” said co-author Valerie Trouet, a professor of dendrochronology in the Laboratory of Tree Ring Research. “We focused on precipitation and stream flow, which are not the only variables fueling drought. Temperature plays an important part as well, and with the world getting warmer, droughts are intensifying.”

“With this increase in variability and warming, it’s also important to consider that a lot of the precipitation is going to start falling as rain rather than snow,” Zamora-Reyes said.

This could mean more dramatic and destructive flooding, but it could also cause a surge in plant growth. If a dry year follows, that could result in more fuel for wildfires. Less snow also means less snowmelt, which usually doles out melted water at a less destructive pace.

“These patterns are going to keep causing billions in damage and are something we need to consider, especially for infrastructure planning,” Zamora-Reyes said.

The researchers also found that precipitation variability is decreasing in the northern part of California in the fall.

“That’s where you get most of the water resources and also that’s where you have a lot of the forested areas,” Zamora-Reyes said. “We’re also seeing that less of these really wet events are coming in the fall, and instead we’re getting most of the precipitation concentrated in winter. We’re seeing this pattern across California. If you look statewide, you see the same trend in both precipitation and stream flow.”

The paper is unique because it highlights the relationship between the increasing variability in both stream flow and precipitation.

“Precipitation winds through complex processes before it ends up as stream flow,” Trouet said. “Stream flow is a much slower process, so we did not expect to also see that clear of a trend in variability in stream flow but we do.”

Zamora-Reyes was surprised by the team’s results.

“I was expecting to see an increase in variability over the last 20 years at most,” she said, “but we’ve been seeing a steady increase for much longer. People are noticing. I’ve talked to strangers about my research, and they say they’ve noticed what I’m talking about. It’s been interesting and eye-opening to see my research play out in real time.”

The researchers looked solely at data collected by sensors and instruments installed decades ago, but in the future Zamora-Reyes and Trouet want to use tree rings to study precipitation and stream flow variability going back hundreds of years.

Zamora-Reyes said that will help them answer questions such as: “How uncommon is this variability? Are there periods in the past comparable to what we’re experiencing right now?”


Citation:
California’s ‘climate whiplash’ has been worsening for 50 years and will continue (2022, January 11)