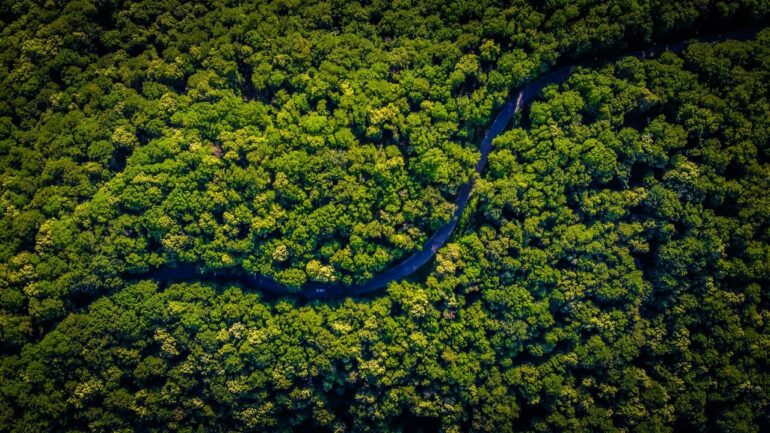 Follow the pollen. Records from past plant life tell the real story of global temperatures, according to research from a climate scientist at Washington University in St. Louis.

Alexander Thompson, a postdoctoral research associate in earth and planetary sciences in Arts & Sciences, updated simulations from an important climate model to reflect the role of changing vegetation as a key driver of global temperatures over the last 10,000 years.

Thompson had long been troubled by a problem with models of Earth’s atmospheric temperatures since the last ice age. Too many of these simulations showed temperatures warming consistently over time.

But climate proxy records tell a different story. Many of those sources indicate a marked peak in global temperatures that occurred between 6,000 and 9,000 years ago.

Thompson had a hunch that the models could be overlooking the role of changes in vegetation in favor of impacts from atmospheric carbon dioxide concentrations or ice cover.

“Pollen records suggest a large expansion of vegetation during that time,” Thompson said.

“But previous models only show a limited amount of vegetation growth,” he said. “So, even though some of these other simulations have included dynamic vegetation, it wasn’t nearly enough of a vegetation shift to account for what the pollen records suggest.”

In reality, the changes to vegetative cover were significant.

Early in the Holocene, the current geological epoch, the Sahara Desert in Africa grew greener than today—it was more of a grassland. Other Northern Hemisphere vegetation including the coniferous and deciduous forests in the mid-latitudes and the Arctic also thrived.

Thompson took evidence from pollen records and designed a set of experiments with a climate model known as the Community Earth System Model (CESM), one of the best-regarded models in a wide-ranging class of such models. He ran simulations to account for a range of changes in vegetation that had not been previously considered.

“Expanded vegetation during the Holocene warmed the globe by as much as 1.5 degrees Fahrenheit,” Thompson said. “Our new simulations align closely with paleoclimate proxies. So this is exciting that we can point to Northern Hemisphere vegetation as one potential factor that allows us to resolve the controversial Holocene temperature conundrum.”

Understanding the scale and timing of temperature change throughout the Holocene is important because it is a period of recent history, geologically speaking. The rise of human agriculture and civilization occurred during this time, so many scientists and historians from different disciplines are interested in understanding how early and mid-Holocene climate differed from the present day.

Thompson conducted this research work as a graduate student at the University of Michigan. He is continuing his research in the laboratory of climate scientist Bronwen Konecky at Washington University.

“Overall, our study emphasizes that accounting for vegetation change is critical,” Thompson said. “Projections for future climate change are more likely to produce more trustworthy predictions if they include changes in vegetation.”