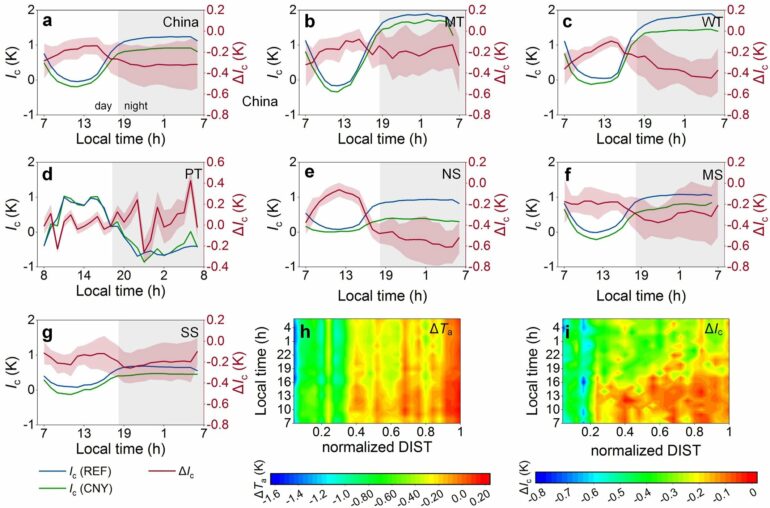 During the week-long Chinese New Year, also known as the Lunar New Year, work is suspended, businesses close and nearly three billion people leave cities to join their families in rural areas for traditional gatherings. The holiday is the largest short-term suspension in human activity on Earth and, according to a new study, is associated with lower temperatures in 31 major Chinese cities during that period.

The study was published in Geophysical Research Letters.

Infrastructure, such as roads and sidewalks, absorb more heat than areas covered with grass and trees. Driving, air-conditioning, heating, building operations and industrial facilities are all examples of human activities that emit heat and also contribute to increased temperatures in cities. When sustained over long periods, these activities can exacerbate warming by releasing greenhouse gases.

“This study stresses the importance of anthropogenic heat-generating activities to urban climate, and particularly the urban heat island,” said Zihan Liu, an Earth system scientist and corresponding author of this study.

Urban heat island intensity—the difference in temperature between urban areas and their rural surroundings—was determined by looking at differences in on-the-ground air temperatures. Using both satellite data and hourly air temperature data collected from ground-based meteorological observation networks from 2017 to 2019, the study found that, during the New Year, the reduction in human activity was enough to lower the average urban heat island intensity in 31 cities by 33% on average. This corresponded with an average drop in surface air temperature of 0.35 degrees Celsius (0.63 degrees Fahrenheit) in cities.

The heat reduction was significantly less pronounced in the outskirts of the cities, suggesting that the more populated city centers experience larger swings in heat intensity variability when there are changes in human activities.

According to Liu, anthropogenic heat release is a major contributor to warming in urban areas, and this study implies that urban heat mitigation during warmer times of the year when people are at risk from extreme temperatures could benefit people living in cities throughout China.

In a similar study published January 2022 in Geophysical Research Letters, Liu and his colleagues found that the urban heat island intensities in major cities throughout China dropped in response to a reduction in human activities during the COVID-19 lockdowns—another example of how changes in human behavior can alter the environment.