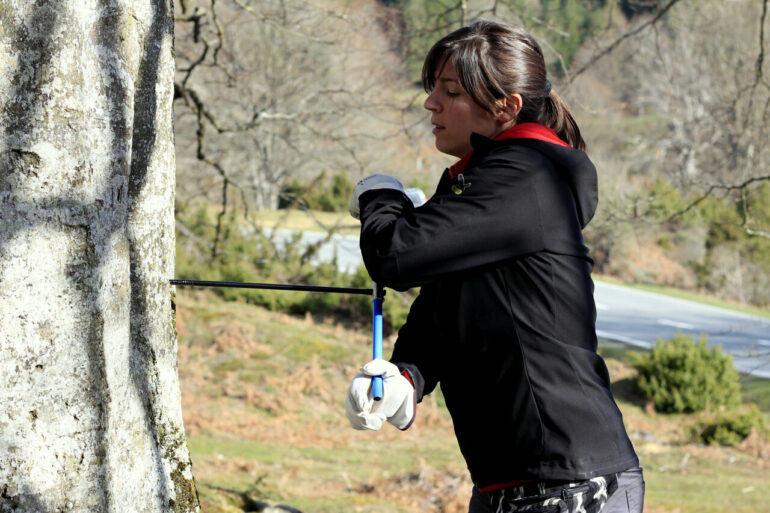 Beech forests in Europe are severely threatened by climate change, particularly in southern European countries, but also in central Europe. Models project severe beech growth declines over the next 70 years—ranging from 20% to perhaps more than 50% depending on the climate change scenario and the region in question. “We expect high productivity declines due to increased drought severity, especially at the southern limits of the beech’s distribution range,” said Dr. Edurne Martinez del Castillo from Johannes Gutenberg University Mainz (JGU). She warns that this will seriously affect both the environment and forestry and urgently recommends that measures be taken to adapt the forests. Furthermore, beech forests are crucial stores of carbon dioxide. The models are based on tree ring analyses from all over Europe using well-established climate scenarios. The study has now been published in Communications Biology.

Beech is one of the most important trees in the forests of Europe. Beech forests are both economically important and ecologically highly valuable. Almost 100 beech forest regions in 18 European countries are listed as UNESCO World Heritage Sites. However, climate change could place severe pressure on stocks in the future, both in geographical and ecological terms. Evidence of this has already been published in regional studies, but to date no comprehensive analysis has been conducted.

Edurne Martinez del Castillo, a member of Professor Jan Esper’s Climatology Group at Mainz University, has now investigated this development for the species Fagus sylvatica, together with cooperation partners from 32 scientific institutions. They performed over 780,000 tree ring measurements on 5,800 trees at 324 sites across Europe, from the north of Scotland to mainland Greece. This data allowed them to analyze the growth rates of the trees over the past six decades, enabling them to forecast likely trends in the future.

Tree growth has declined in virtually all regions

The results reveal marked geographical differences between the two study periods of 1955 to 1985 and 1986 to 2016. For example, the model tree growth rate over the past six decades was two to three times higher in low-lying areas of northwestern and central Europe—such as coastal regions in Belgium, the Netherlands, Denmark, and the British Isles—than towards the southern distribution limits. Comparing the two 31-year periods revealed a remarkable decline in tree growth in almost all distribution regions. The models reveal that the strongest contrast is between northern Europe with Sweden and Norway, where growth has risen by 20%, and southern Europe, where growth has declined by as much as 20%.

Based on two widely accepted climate research scenarios from the Coupled Model Intercomparison Project (CMIP), Edurne Martinez del Castillo has projected the developments likely to occur over the next 70 years through to 2090. “Even assuming a relatively optimistic climate change scenario, we will see sharp growth reductions of up to 30% in southern Europe between 2020 and 2050 compared to the 1986 to 2016 period,” said the climate researcher. The optimistic climate model assumes a temperature increase of one degree Celsius by 2090, while the pessimistic scenario predicts a warming of five degrees Celsius. The latter would have dramatic consequences. Beech productivity would decline sharply in much of Europe, by as much as 20 to 30% in most central European forests. “In southern Europe, losses could even exceed 50%,” said Martinez del Castillo, noting that increased aridity would affect the pattern. In contrast, in the north and in mountainous regions, the growth trend would be positive. Overall, however, the gains will not be as severe as the losses, neither geographically nor in terms of absolute numbers.

In light of these forecasts, the authors of the study led by Edurne Martinez del Castillo and Jan Esper believe that forest adaptation measures are urgently required to mitigate serious environmental and economic consequences. All the more so because beech forests act as carbon dioxide sinks, and the reduction in tree growth is expected to lead to further forest dieback, reducing this effect.