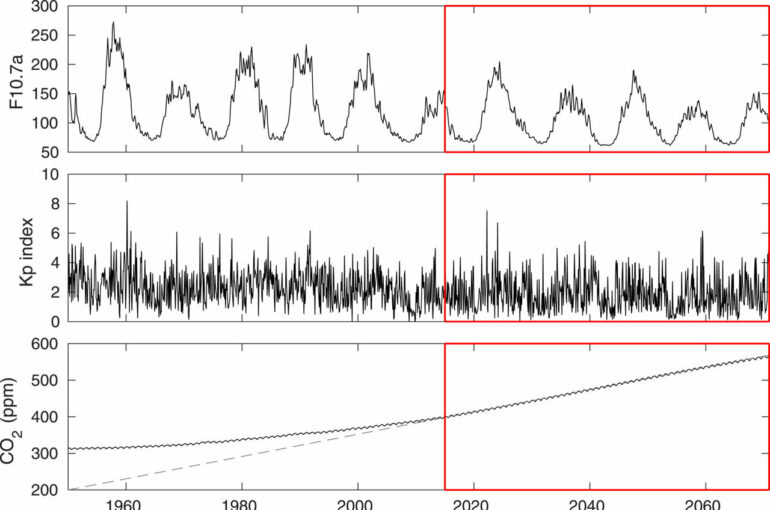 Satellites face greater chances of collision with space debris as a result of reduced density in the upper atmosphere.

Increasing levels of CO2 in the Earth’s atmosphere will result in a long-term decline in air density at high altitudes, according to new research from British Antarctic Survey. Such decreased density will reduce drag on objects orbiting in the upper atmosphere, between 90 and 500 km altitude, extending the lifetime of space debris and elevating the risk of collisions between debris and satellites.

As society becomes ever more dependent on satellites for navigation systems, mobile communications and monitoring Earth, collisions could cause major problems if satellites, that cost billions of dollars, are damaged.

The study, published in the journal Geophysical Research Letters last month (September), presents the first realistic projection of climate change in the upper atmosphere for the next 50 years. Though many studies have investigated the changes that will take place in the lower and middle atmosphere, research into higher altitude scenarios is much more limited.

As of March 2021 there were about 5,000 active and defunct satellites in low Earth orbit—up to 2,000km altitude—and this number had increased by 50% over the previous two years. There are various companies planning to add thousands more in the next decade. Once decommissioned, satellites continue to orbit but gradually slow due to atmospheric drag, lowering their orbital altitude until they burn up in the lower atmosphere.

Current guidelines set by the Inter-Agency Space Debris Coordination Committee advise that satellite operators make sure that decommissioned satellites deorbit within 25 years but reduced atmospheric density will introduce errors in planning and calculations.

In contrast to the lower atmosphere, the middle and upper atmosphere has been cooling. This leads to a decline in density with practical implications for the drag on objects such as derelict satellites and space mission related debris at those altitudes. With reduced drag the lifetime of these objects is extended, objects remain in orbit for longer and there is a greater risk of collision with active satellites as well as with other space debris.

Ingrid Cnossen, a NERC independent research fellow at the British Antarctic Survey, used a global model of the whole atmosphere up to 500 km altitude to simulate changes in the upper atmosphere up to 2070. She compared her projections to the last 50 years of data and found that even under a moderate future emissions scenario the predicted average cooling and decline in upper atmosphere density is about twice as strong as has been seen in the past.

Cnossen says that “the changes we saw between the climate in the upper atmosphere over the last 50 years and our predictions for the next 50 are a result of CO2 emissions. It is increasingly important to understand and predict how climate change will impact these regions, particularly for the satellite industry and the policymakers who are involved with setting standards for that industry.”

“Space debris is becoming a rapidly growing problem for satellite operators due to the risk of collisions, which the long-term decline in upper atmosphere density is making even worse. I hope this work will help to guide appropriate action to control the space pollution problem and ensure that the upper atmosphere remains a usable resource into the future.”

There are over 30,000 trackable debris pieces in low Earth orbit larger than 10 cm in diameter and 1 million debris objects greater than 1 cm according to the European Space Agency.

The ionosphere—the charged part of the upper atmosphere—is also expected to change, in part as a result of increasing CO2 concentrations but also because of changes in the Earth’s magnetic field. Understanding the distribution of electrons in the ionosphere is important to correct for errors that they introduce into satellite-based sea level measurements used for climate monitoring.

The largest changes in electron count are found to be expected over South America, the southern Atlantic Ocean, and western Africa. The study recommends that further studies monitor these changes and build up a picture in order to control for effects on satellite-based data applications.

The research is published in Geophysical Research Letters.