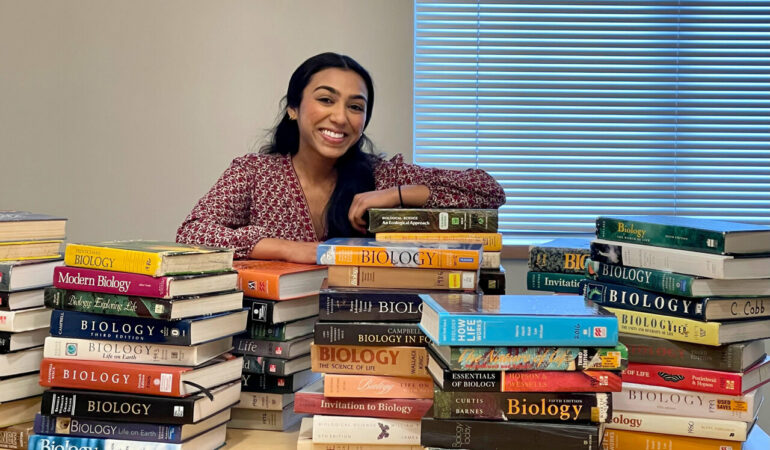 A new study from North Carolina State University finds that biology textbooks have done a poor job of incorporating material related to climate change. For example, the study found that most textbooks published in the 2010s included less information about climate change than they did in the previous decade—despite significant advances in our understanding of how climate change is influencing ecosystems and the environment.

“In short, we found biology textbooks are failing to share adequate information about climate change, which is a generation-defining topic in the life sciences,” says Jennifer Landin, corresponding author of the study and an associate professor of biological sciences at NC State. “These books are the baseline texts for helping students understand the science of life on Earth, yet they are providing very little information about a phenomenon that is having a profound impact on habitats, ecosystems, agriculture—almost every aspect of life on Earth.”

For the study, researchers analyzed coverage of climate change in 57 college biology textbooks published between 1970 and 2019. The researchers found that climate coverage has varied substantially over those five decades.

“One of the most troubling findings was that textbooks are devoting substantially less space to addressing climate solutions now than they did in the 1990s—even as they focus more on the effects of climate change,” Landin says. “That suggests to students that nothing can be done, which is both wildly misleading and contributes to a sense of fatalism regarding climate change.”

In addition, the position of climate change sections keeps moving further back in the books, from the last 15% of the overall text in the 1970s to the last 2.5% of the text in the 2010s.

“This is important because most instructors present textbook content in order, which means topics at the end of the book are often skipped,” Landin says.

“However, it’s not all bad news,” Landin adds. “Textbooks in the 2000s and 2010s began including a wider variety of climate-relevant information, such as how climate is affecting species distributions, which can help students understand the various impacts of climate change.

“However, we are hoping that this study will serve as a wake-up call for publishers and instructors. We need to do a much better job of incorporating climate change into our courses if we want to prepare students to understand the role that climate change is playing in shaping life on Earth and how we study it.”

The paper, “Coverage of climate change in introductory biology textbooks, 1970-2019,” will be published Dec. 21 in the open-access journal PLOS ONE. First author of the paper is Rabiya Arif Ansari, a former undergraduate at NC State.