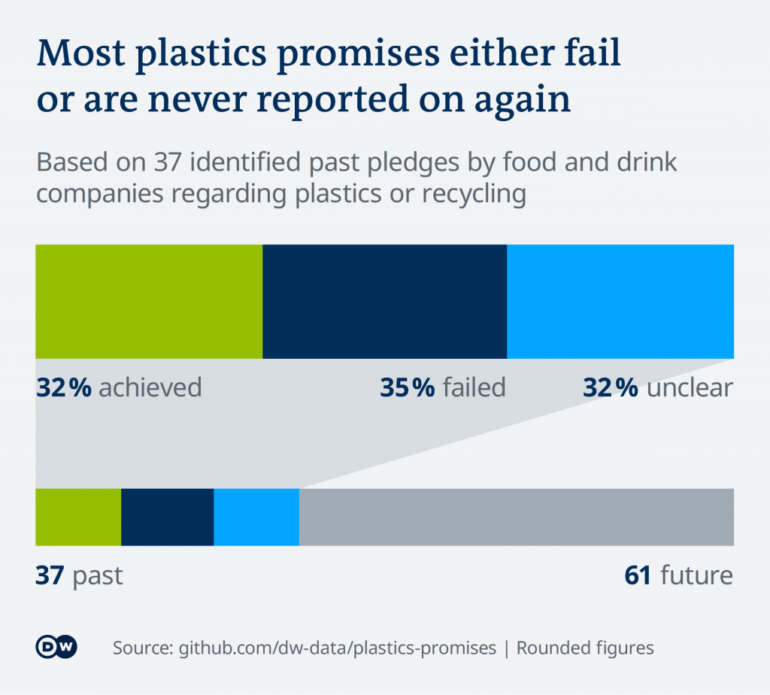 Plastic pollution is overwhelming landfills, littering Earth’s coastlines, and affecting the health of animals, including humans, while also contributing to environmental degradation and climate change.

As public expectations for corporate responsibility grow and an increasing number of businesses pledge to reduce plastic use, researchers publishing in the journal One Earth on November 18 detail how the world’s largest and most powerful companies’ focus on recycling rather than virgin plastic reduction makes their commitments less meaningful.

The study focused on the top 300 Fortune 500 companies and found that 72% had made a commitment to reducing plastic pollution. “Most of the commitments emphasize plastic recycling and commonly target general plastics,” write the authors, led by Zoie Taylor Diana, an environmental researcher at the Duke University Marine Laboratory. “They are important, but partial, solutions if we are to comprehensively address the plastic pollution problem.”

“Between 1950 and 2017, plastics production increased 174-fold and is forecast to double again by 2040,” the authors write. “As of 2015, an estimated 79% of global plastic waste was in landfills or ended up in the natural environment, 12% was incinerated, and 9% was recycled. Plastics in the environment have negative repercussions at all levels of biological organization.”

The paper highlights the companies’ overwhelming focus on changing their consumption and production patterns, often by including more recycled content in their products and “lightweighting”—the practice of marginally reducing the volume of plastic used to package a particular product.

“From our literature review, we found that multiple companies, such as the Coca-Cola Company and Walmart, are producing lighter and smaller plastic products (e.g., bottles and bags),” write the authors.

Going forward, the authors say that the scientific community should continue to monitor the plastic practices of major companies and the effects that plastics are having on the planet. “Scientists (including natural, life, and social scientists) have an important role in monitoring and defining environmental issues, which may aid in holding companies accountable.”