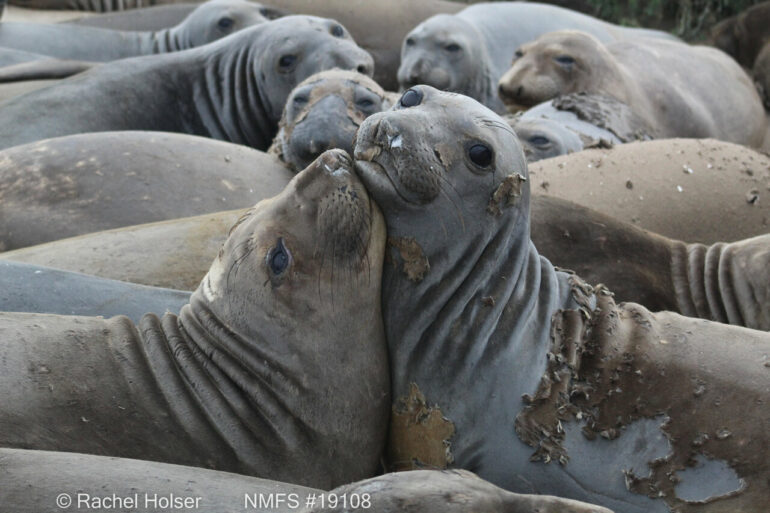 The North Pacific Blob, a marine heatwave that began in late 2013 and continued through 2015, was the largest and longest-lasting marine heatwave on record. A new study using data collected by elephant seals reveals that in addition to the well documented surface warming, deeper warm-water anomalies associated with the Blob were much more extensive than previously reported.

The new findings were reported by a team of biologists and ocean scientists at UC Santa Cruz in a paper published July 4 in the Journal of Geophysical Research: Oceans.

“The elephant seals collect data in different locations than existing oceanographic platforms,” explained senior author Christopher Edwards, a professor of ocean sciences at UC Santa Cruz. “This is an underutilized dataset that can inform us about important oceanographic processes, as well as helping biologists understand the ecology of northern elephant seals.”

For decades, UCSC elephant seal researchers led by coauthor Daniel Costa, professor of ecology and evolutionary biology and director of the UCSC Institute of Marine Sciences (IMS), have been using advanced tagging technology to track the months-long migrations of elephant seals in the North Pacific Ocean.

“While seals have been used to study the physical oceanography of polar regions for some time, this is one of the first studies to use seal-collected data to address physical oceanographic questions in temperate regions, such as the North Pacific Ocean,” Costa said.

The animal-borne sensors record depth, temperature, and salinity while the animals dive repeatedly to great depths during migrations of some 6,000 miles across the North Pacific.

“Female elephant seals go out into the open ocean where a ship might go through and collect data only once in awhile, whereas we have elephant seals out there collecting data all over the place,” said first author and IMS research biologist Rachel Holser. “It’s unusual to have this kind of data at the resolution we have in both time and space, and at depths below several hundred meters.”

The elephant seal data collected during the Blob revealed that abnormally warm temperatures extended 1,000 meters (3,280 feet) below the surface. The subsurface warming persisted into 2017, well after surface temperatures had returned to normal.

The Blob has been well studied with respect to the surface warming, which was driven by atmospheric conditions and was waning by late 2015. The extensive subsurface warming raises questions about the mechanisms behind it, Edwards said.

“Those temperature anomalies are so deep it’s unlikely it would be due to mixing from the surface,” he said. “One reasonable mechanism is that the unusually warm waters were transported northward from further south. What we don’t know yet is whether that northward transport is directly or indirectly related to the surface warming. Changes at the surface could have altered deeper currents transiently to draw southern waters to the north.”

Marine heatwaves are expected to increase in frequency, magnitude, and duration as global temperatures continue to rise. These events can have significant impacts on marine life, as well as economic consequences for local communities that rely on marine fisheries and ecosystems. Understanding the physical processes involved in marine heatwaves will help scientists predict their onset and development and allow people to anticipate and address the ecological and economic consequences.

“Just like with terrestrial heatwaves, we have seen over the last decade a dramatic increase in the frequency and magnitude of marine heatwaves,” Holser said. “The more information we can collect the better off we’ll be in terms of understanding what’s happening and facing the challenges. This study shows the value of collaborating with elephant seals to collect oceanographic data that is complementary to other methods.”