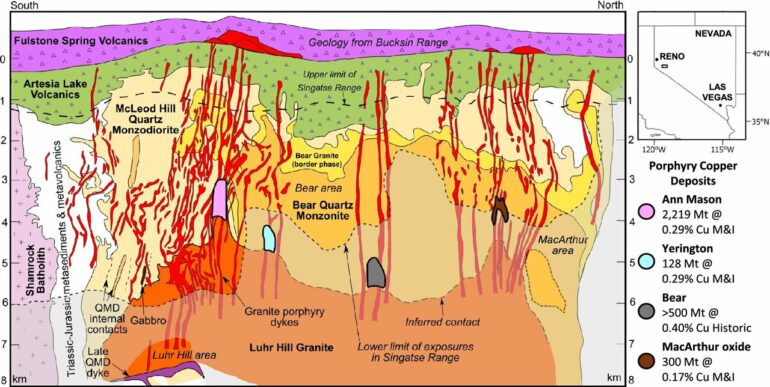 Scientists have made a fascinating new discovery about the formation of mineral deposits crucial to our transition to a ‘green economy’.

The new collaborative study, led by Lawrence Carter from the University of Exeter’s Camborne School of Mines, has shown that porphyry-type copper deposits form due to a rapid change in the underlying magmatic plumbing system which forms them.

The study describes a new 4D model for the formation of porphyry-type copper deposits which challenges the current paradigm of a progressive, multi-million year, arc-scale ramp up in the “fertility,” or mineralizing potential, of magmatic systems. There may instead be an order of magnitude more rapid switch, over a period of less than 200 kyrs, from the intrusion of non-mineralizing to porphyry deposit-forming magmas. The suggested cause of this is a change from magma production in the mid-crust to lower crust, probably initiated by the intrusion of much hotter magmas from the mantle.

The researchers believe that these findings will help exploration geologists discover the next generation of porphyry copper deposits. Porphyry-type deposits provide most of the world’s copper and molybdenum, as well as large amounts of gold and other metals, which are of increasing demand for green technologies such as electric vehicles, wind turbines and solar panels, and for power transmission.

As such, they are the principle target of many mining companies worldwide. The problem is that most large near-surface deposits have already been found and therefore geologists are having explore deeper and under thicker layers of younger rocks to find them. There is therefore a growing need to better understand where and how porphyry copper deposits form and for new methods to find them.

The new study was carried out in the Yerington Batholith of Nevada, where tilting of the upper crust has provided one of the world’s best-exposed (~8km deep) sections through a magmatic-hydrothermal system, from the volcanic to plutonic environments, including four porphyry deposits. Because of this, previous studies in the district have underpinned much of the current understanding of how porphyry-type deposits form.

Lawrence Carter, lead author of the study and Associate at Camborne School of Mines, based at the University of Exeter’s Penryn Campus says that “to address the previously fragmented understanding of the magmatic timescales associated with porphyry-deposit formation, we have studied the world’s best exposed porphyry system by integrating field observations and geochemistry with state-of-the-art high precision zircon U-Pb geochronology. We show that magmatic-systems can ‘switch-on’ their ability to form ore deposits due to a rapid change in their magmatic plumbing, tapping a deeper, more volatile-rich, ‘fertile’ zone.”

The research is published in Scientific Reports.


Citation:
Discovery about how porphyry-type copper deposits form could be crucial to ‘green economy’ (2022, October 17)