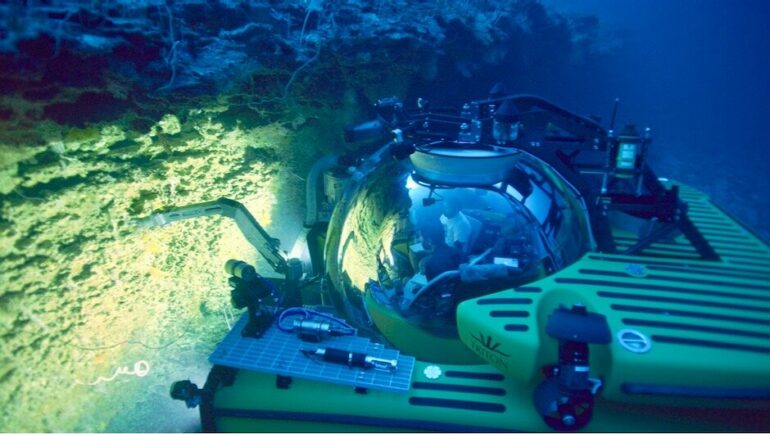 An earth scientist from the University of Miami Rosenstiel School of Marine and Atmospheric Science discovered evidence of an ancient underwater landslide and associated tsunami in the Gulf of Aqaba, a subsidiary of the Red Sea, that should serve as a warning for many nations in the Middle East.

Sam Purkis, professor and chair of the Department of Marine Geosciences, spent four weeks aboard the OceanXplorer research vessel in the region. As he and a fellow scientist were ascending from 3,000 feet during a submersible dive, Purkis noticed a startling break in the seabed. It was an unexpected find, although not out of the question for the Red Sea, which was formed by the separation of the African and Arabian tectonic plates 30 million years ago.

“Immediately, I realized that what we were looking at was the result of some geological force, which had broken the seafloor,” said Purkis.

Purkis then began a scientific journey to learn more about the chasm, and took rock samples, which revealed that it had been created by a landslide that likely occurred 500 years ago. He was also able to find evidence from sediment collected north of the chasm, which showed that a tsunami was likely spawned by the landslide.

The study, “Tsunamigenic Potential of an Incipient Submarine Landslide in the Tiran Straits,” published February 3, 2022 in the journal Geophysical Research Letters of the American Geophysical Union (AGU), predicts that future movement of the seabed might trigger more tsunami in the Gulf. Therefore, the nations along its coasts—including Egypt, Jordan, Saudi Arabia, and Israel—need to ensure that early warning systems are in place for both earthquakes and tsunami.

“Just a little shake in the wrong place and the whole wall could fail, leading to a much larger tsunami than occurred 500 years ago,” Purkis said. “That area of Egypt, as well as Saudi Arabia, which are urbanizing so rapidly, have certain hazards which haven’t been previously recognized, but they need to be, to avoid a future catastrophe.”

The entire OceanXplorer research voyage was funded by Neom, a company developing the Saudi Arabian coastline.

Provided by
University of Miami