Diurnal oxidation for manganese minerals in the Arctic Ocean 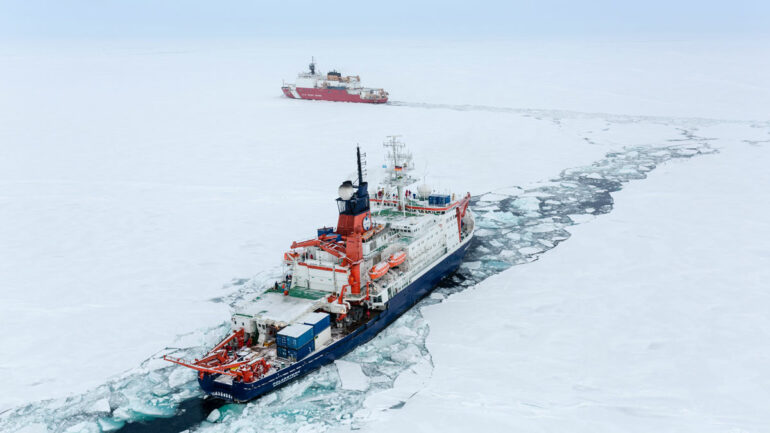 Manganese is an important element for all life, but it plays an especially critical role in photosynthesis, in which it is the catalyst for splitting oxygen molecules from water. In the ocean—where phytoplankton is a key source of photosynthesis—manganese exists in three oxidation states: Mn(II), Mn(III), and Mn(IV).

In the Mn(II) form, manganese is quite soluble and can be used by phytoplankton as a micronutrient for photosynthesis. In the Mn(IV) form, it forms highly reactive solid-phase manganese minerals that can act as a sponge to remove other elements from solution. Understanding the relative abundance of manganese oxidation states tells us which of these important roles manganese is playing. Past studies in low-latitude oceans have pointed to diurnal variations in the relative abundance of the various oxidation states in the near-surface ocean layer.

In a new study, Xiang et al. explore the cyclical nature of manganese oxidation state abundances using samples collected during a 2015 GEOTRACES cruise in the Arctic Ocean. The authors attempted to identify diurnal changes in the Arctic using synchrotron-based X-ray absorption spectroscopy. Micrometer-sized manganese particulates were extracted from seawater pumped from the survey vessel at an ocean depth of roughly 20 meters, where sunlight can reach during the daytime, and the researchers analyzed 13 samples covering a range of local times.

From the spectroscopy results, the authors estimated the average oxidation state of each sample and correlated that with the available light at the time of sample collection. One complicating factor in the Arctic is the presence of 24-hour days and 24-hour nights during some parts of the year. The 13 samples were split into four groups corresponding to whether they were collected during the day or the night and whether there was a diurnal sunlight cycle at that time.

The authors’ analysis found that the most oxidized samples were collected during darkness, and the least oxidized ones were collected during the day. Specifically, the average oxidation state was less than 2.4 for samples collected in light and greater than 3.0 for samples taken in darkness. Although the total number of samples is relatively small, this is compelling evidence for the existence of a diurnal cycle in the oxidation state. As manganese can be a key micronutrient for photosynthesis-based ecosystems in its reduced state and acts like a sponge in its oxidized state, this observation may have important implications for biological and chemical cycling during times of extreme light or darkness in the Arctic.