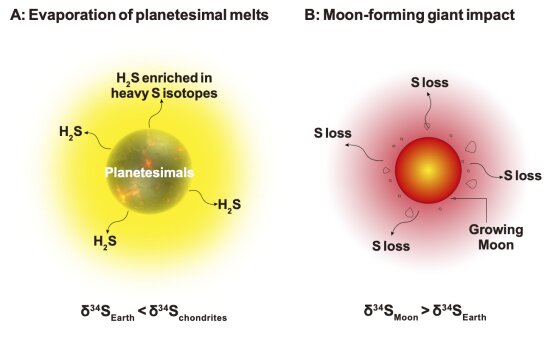 Volatile elements, such as carbon, hydrogen, nitrogen and sulfur (S), are of profound importance for the formation, the differentiation and the habitability of a planet. However, today’s Earth, though rich in life, contains relatively little volatile matter. This fact offers numerous insights into the proliferation and the evolution of volatile content in terrestrial planets.

In a study published in Nature Geoscience, a research group led by Prof. Wu Zhongqing from University of Science and Technology of China (USTC) of the Chinese Academy of Sciences discovered that under the environment of solar nebula, protoplanetary embryo’s melting and evaporation are the major causes of Earth’s lack of volatile elements.

According to previous researches, Earth possesses a considerable absence of volatile elements, compared with the early solar system. This phenomenon was controversial with several mechanisms postulated, such as meteorites carrying volatile matter or evaporation during Earth’s evolution. Accurate data regarding the ratio of S isotopes rose to prominence as a result. However, since large amount of S infiltrated Earth’s core during the core-mantle differentiation, its isotopes’ ratio in the entire Earth has long puzzled scientists.

Employing thermodynamic calculations, researchers discovered that when the protoplanetary embryo was melting, heavy isotopes of S volatilized in the form of hydrogen sulfuric, which is in accordance with the low ratio of S isotopes on Earth. In addition, they found that large amount of S was lost during the giant impact which formed the moon, leaving lighter S isotopes for Earth.

The study shows that initially the Earth was abundant in volatile content, and it was the evaporation in early stages that led to Earth’s composition today. It provides new insights regarding the origin of volatile substance on terrestrial planets.