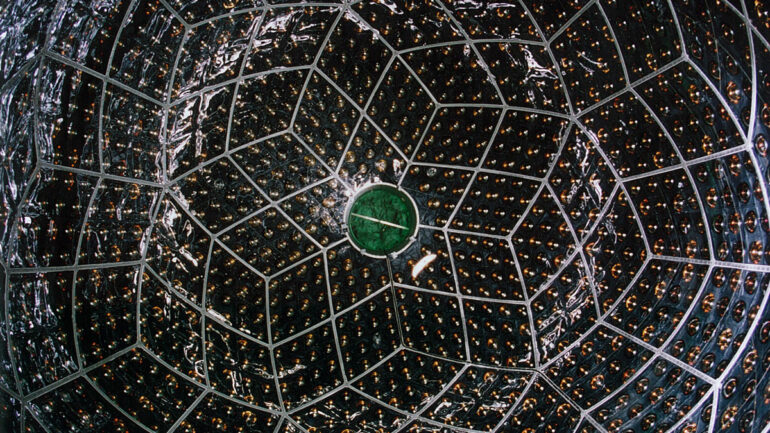 A planet’s interior heat comes from two principal sources: leftover energy amassed from collisions between planetesimals during the accretion of the planet and the subsequent decay of radioactive elements embedded within that material.

Uranium (U), thorium (Th), and potassium have contributed significantly to Earth’s internal energy budget, and the magnitude of that contribution is a key constraint on the interior’s evolution. However, because they are located deep within Earth, the abundance of those elements has been thus far difficult to estimate.

In their study published in Geophysical Research Letters, Abe et al. present new, significantly tighter constraints on the abundances of uranium and thorium measured using a unique observational window: the detection of terrestrial electron antineutrinos. These antineutrinos are emitted during the beta decay of 238U and 232Th and then pass unencumbered through Earth. A tiny fraction of these particles can then be measured by an experiment called the Kamioka Liquid Scintillator Antineutrino Detector (KamLAND).

KamLAND, based in Hida, Gifu, Japan, is located 1,000 meters underground in an abandoned mining shaft. It uses a large vat of liquid to induce the beta decay reaction, in which an incoming antineutrino strikes an atomic nucleus and converts a proton to a neutron and a positron. These particles can then be observed by the detector.

KamLAND was originally intended to observe antineutrinos emitted by Japan’s commercial nuclear reactors. However, after the 2011 Fukushima nuclear accident, these reactors were all shut down. The sudden absence of artificially produced antineutrinos dramatically increased KamLAND’s sensitivity to those of natural origin. In total, the authors present 18 years of data, nearly half of which has been recorded since the shutdown of Japan’s reactors.

The researchers compare the observed antineutrino flux to those predicted by three models for the abundance of uranium and thorium within the mantle. These models correspond to three levels of heat added to the interior: low (10–15 terawatts), medium (17–22 terawatts), and high (more than 25 terawatts). They consider two variations of each model: one with radioisotopes distributed uniformly throughout the mantle and one with them concentrated at the core-mantle boundary.

The data exclude both variations of the high-heat model with greater than 97% confidence. Because this model was constructed to provide the heat necessary to support mantle convection, it suggests that our understanding of this convection may require some modification.